Here Is An Update On The Casualties Of The Invasion

Here Is An Update On The Casualties Of The Invasion #UKRAINE: Russia’s military says 498 Russian soldiers have been killed, 1,597 wounded, since war broke out, in the Kremlins’ first statistical confirmation of combat deaths in Ukraine.

Ukraine is claiming over 7,000 Russians have been killed in the fighting with hundreds taken prisoner. A US official put Russian losses at 2,000 dead on Monday. Senior Pentagon officials said both sides had lost about equal troops in the fighting, 1,500 each, in a closed-door briefing on Monday, reported the New York Times.

It seems both sides are exaggerating their kills, and downplaying their casualties. This is to be expected obviously. Just goes to show the insignificance governments place on their soldier’s lives. Using numbers for political gamesmanship is not new.

According to Statista, the statistics of the invasion are as follow: 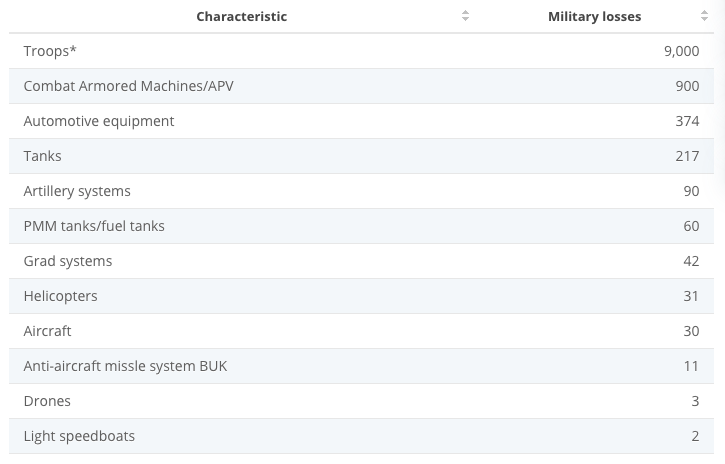 Countries With The Most Refugee Intake

over one million refugees left their homes in Ukraine and headed toward Western countries. Most of them fled to Poland. According to the source, nearly 48 thousand Ukrainians left for Russia. Sanctions Placed On Russia, By Target

As of Monday, the European Union, Japan, Switzerland, the United Kingdom (UK), and the United States (U.S.) imposed restrictions on a total of 822 individuals from Russia due to the country’s recognition of the separatist Donetsk and Luhansk People’s Republics (DPR and LPR) and its military attack on Ukraine. Restrictions against individuals typically include asset freezes and travel bans. Furthermore, 117 companies were targeted by the Western sanctions over that period. For comparison, There were 2,401 United States military deaths in the War in Afghanistan. 1,921 of these deaths were the result of hostile action. 20,752 American service members were also wounded in action during the war. In addition, 18 Central Intelligence Agency (CIA) operatives also died in Afghanistan.