Thousands of Nurses and Midwifes on Strike in Australia

Thousands of Nurses and Midwifes on Strike in Australia 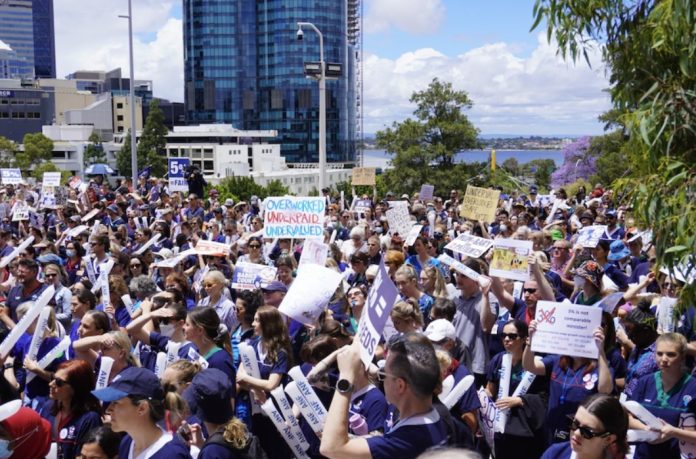 In protest of payment, thousands of nurses and midwives in Western Australia have walked off their jobs and gone on strike. The majority of those on strike held a rally outside of Western Australia’s parliament building. A major demand is a five percent pay raise.

Serious crowd growing of WA nurses and midwives rallying at Parliament House over pay and conditions. The Australian Nursing Federation defying orders by the IRC to strike. @abcperth @abcnews pic.twitter.com/sD74liLHbZ

Reportedly, thousands of surgeries have been canceled because of the strike. These surgeries include ones for cancer patients. An estimated 14,000 hospital appointments were canceled as well.

The Australian Nursing Federation—the largest union in Australia—was accused by the WA Industrial Relations Commission of negotiating in “bad faith” and urged for the state-wide strike to be called off.

The Industrial Relations Commission even attempted to ban bus companies from transporting those who were on strike.

In response to accusations of putting patients at risk, ANF state secretary Janet Reah gave a speech at the protest and thanked those who stayed at their jobs to allow the strike could happen. The claim is that a small number of nurses and midwives acted as a skeleton crew to avoid putting patients in danger.

The premier of Western Australia, Mark McGowan stated that an offer was made which met the majority of demands made by the ANF. According to McGowan, the offer was accepted in principle before the ANF backtracked and rejected it.

Premier McGowan added that a five percent increase in pay is unreasonable.