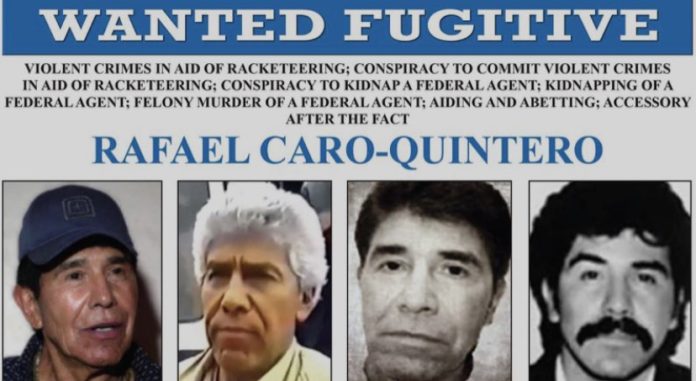 Rafael Caro Quintero was arrested on July 14. He is described by some as the ‘narco of narcos’ and portrayed, particularly in the Netflix show Narcos, as a drug kingpin obsessed with snorting cocaine, gold jewellery and violence. The images of him after his arrest are a stark contrast, he is a man in his later 60s now, wearing simple clothes.

Quintero is said to be one of the leaders of the Guadalajara Cartel, the supposed first Mexican cartel to traffic cocaine from Colombia into the US. The role of Quintero has been repeated through most of the coverage since his arrest – he is referred to as a drug lord, who held immense power and control over the hierarchical cartel organisation. Quintero was released from prison, after 28 years for the murder of DEA agent ‘Kiki’ Camarena, and is said to be again involved in the trafficking of narcotics. What most of the reporting misses is a lack of nuance and ambiguity at the heart of a character like Quintero and his role in an organisation like the Guadalajara Cartel.

Academic Carlos Pérez Ricart says bluntly “The Guadalajara Cartel never existed”. Ricart depicts how the concept of a Guadalajara Cartel was constructed, from individuals in the United States, and then spread, despite the supposed organisation never being referred to as a cartel during its existence. The name Guadalajara Cartel gained traction during the 90s, and has since, along with the rise of cartel discourse as a whole, stuck.

In reality, the organisation was one of loose, often family based, connections which “changed its modus operandi based on the circumstances at the time.” It existed within the labyrinth like power structures of Mexican society, seeing a range of informal and formal arrangements between parts of the state forces, local police, custom agents and local non-state actors and businessmen. Presumed leader of the Knights Templar Cartel, ‘La Tuta’, was arrested in 2015. Upon his arrest he stated, “this isn’t organised crime, this is disorganised crime.”

This map, produced by the DEA in 1989, attempts to show the number of major drug trafficking organisations in Mexico. There are 62. 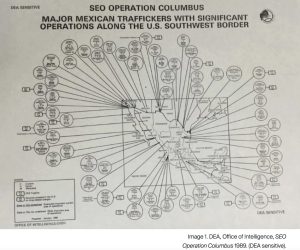 The structure then was not top-down hierarchy, in which individuals like Quintero and the supposed leader Miguel Ángel Félix Gallardo control everything. The structure was an underworld, deeply embedded in state corruption, which ran on local alliances and smuggling networks.

This is not to say that Quintero was not involved in crime, he clearly was. Just, the depiction of him as a man of deep power controlling an all-powerful drug cartel. is fiction, just as his character is in Narcos.

This is an issue not just limited to Quintero and the Guadalajara cartel, but a hegemonic discourse on drug trafficking in Mexico. Author of Drug Cartels Do Not Exist, Oswaldo Zavala, writes that this reporting on cartels and narcos, which emanates from state press releases and discourse, “hides the real networks of official power that determine the flow of drug trafficking”. The narco kingpin, is a story which depicts drug trafficking as the work of evil outside of state power, which the benign state must take up war against.

Zavala calls for the end of “the endless repetition of absurd stories about the rise and fall of presumed drug lords, their cartels, and their plazas’ ‘. In reality, the world of drug trafficking exists within and subordinate to the state, it doesn’t challenge it. Individuals like Quintero exist within a deeply chaotic world of drug trafficking, they do not control it.  The rise and fall of narco kingpins are constant. The fall of El Chapo, Escobar, and again Quintero has had and will have no effect on the global drug supply.