Missile Strikes Reported Throughout Much of Ukraine 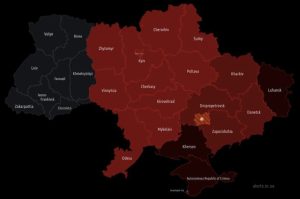 Russian cruise missile launches were first reported by the authorities of several Ukrainian regions and later by both pro-Russian and pro-Ukrainian Telegram channels at approximately 00:30 am eastern time. Reports of explosions were later reported in several regions including Kyiv, Mykolaiv, Dnepropetrovsk, Vinnytsia, and Odessa. It’s so far unclear what the targets of these strikes were and how many of the missiles were neutralized by Ukrainian air defenses.

Some pro-Russian Telegram channels reported that the missiles were of the ‘Caliber’ variety and were launched from the Caspian Sea, but this is not yet substantiated. Russian missile barrages of this kind have become fairly common for Ukraine, they occur about once or twice a week. According to the Russian Ministry of Defense, the strikes typically target Ukrainian energy infrastructure and facilities used for the transporting and storage of western arms.

Update: More launches have been reported by the Ukrainian Air Force. They say the launches are from Tu-95 bombers. Ukrainian Air Force spokesperson Yuriy Ignat says “We expect more than 30 missiles, which have already started to appear in various regions. Air defense is working.”

Former US Marine Killed in Bakhmut While Evacuating Civilians

According to emerging reports, former US Marine Peter Reed...

SITREP: Chinese ISR Balloon Over US