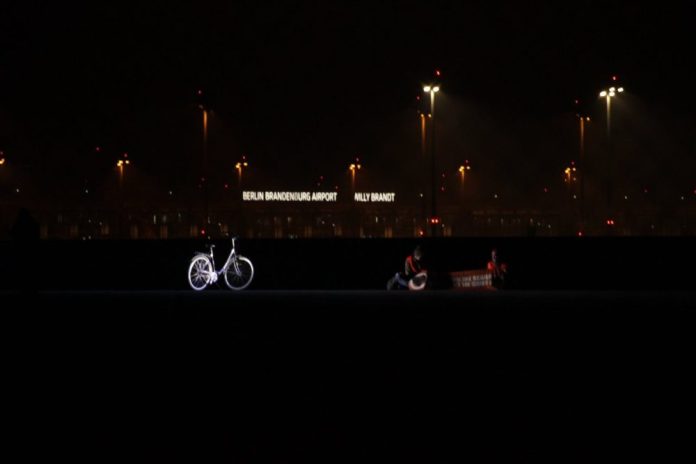 Supporters of the self-proclaimed “Last Generation” halted flight operations in Germany’s capital city of Berlin early Thursday evening after gaining access to the runway which forced flights to stop. They reportedly breached the airport from the north and south, leading to the airport closing both runways and diverting incoming flights to Hanover and Leipzig. Apparently several activists glued themselves to the ground, while others rode bicycles across “non-public” areas of the airport according to a spokesman for the Berlin Federal Police. The activists livestreamed their action through Periscope on Twitter, they could be seen cutting through a fence and holding up banners once inside. After around ten minutes police lights could be seen on the livestream.

“Supporters of the last generation are currently blocking the runway at Berlin Brandenburg Airport. While some of them are glued to the asphalt, others are riding bicycles across the maneuvering area, bringing air traffic to a standstill. Shortly before entering the airport premises, they informed the police of their plans via an emergency call.

Michael Hassemer, judge at the Rhineland-Palatinate Constitutional Court, considers the resistance of the last generation to be justified by the climate emergency : ” The consequences that humanity will suffer from the failure to take climate protection measures are in any case so serious that legal impairments through protest to a certain extent are justified by the state of emergency and are therefore to be accepted .

Aimée van Baalen , spokeswoman for the Last Generation, said ” [The fact] That this pressure is even necessary, that ordinary citizens have to sit in prison cells for weeks to get the government to protect the people is dismaying .”

Lina Schinköthe is sitting on the tarmac today because she can no longer accept this injustice. She emphasizes: “ In the end, we will all suffer from the climate catastrophe. However, it is precisely those who are least responsible for them who are hit first and hardest. A society cannot afford this ruthlessness! ”

[Our] peaceful resistance is aimed at the federal government. This negligently puts us on a collision course with climate tipping points. Fossil subsidies, including for air travel, are sacrificing millions of lives right now for the profit and luxury of a few.

The plane is not a means of transport for ordinary people. Most people – about 80 percent of the world’s population – have never flown in their lives. One affluent percent of the population is responsible for around half of flight-related greenhouse gas emissions . The government promotes air travel with billions in subsidies every year . And that while we really urgently need to switch from planes and cars to trains. In order to give everyone access to public transport, the last generation calls for the continuation of the 9-euro ticket as a first security measure. In addition, street blockades are taking place in Cologne and Berlin today against the deadly fossil fuel.

20 people of all ages are currently in prison in Munich for peacefully taking part in a Last Generation street blockade. Today, among other things, the 70-year-old Abo is blocking the runway of BER. It’s about everything and about all of us. Looking away is no longer an option.”

Brandenburg’s Minister of the Interior Michael Stübgen (CDU) told the Tagesspiegel: “The incident at BER Airport is a dangerous intervention in air traffic – it is a serious crime that, in the worst case, even endangers human life.” There was nothing to justify this. “I stand by it: anyone who intentionally puts others at risk for their worldview is not an activist, but a criminal,” said Stübgen. “Today the criminals triggered a further escalation level. This shows that the penalties imposed so far have obviously not been suitable for preventing repeat offenses,” said the Berlin FDP interior expert Björn Jotzo in the evening. “Criminal blockers terrorize Berliners on the streets almost every day and the Berlin Senate is still watching or even secretly applauding.”