the first salvo of the Kalibr-NK system cruise missiles against Free Syrian Army targets in Aleppo and Raqqa. These missiles flew 20 meters Above Ground Level (AGL) through Iraqi and Syrian airspace to avoid Turkish intercepts.

The salvo of 26 missiles struck 11 targets and thus began the careful cultivation of optimization of the Russian Federation’s modern Cruise Missile strike capability. Over the course of the ongoing Russian intervention in Syria’s bloody civil war, the Kalibr has been the stand-off weapon of choice from Russian long-range aviation, surface combatants, and sub-surface combatants.

That capability was on full display on February 24th, 2022 when approximately 100 Kalibr missiles struck the Integrated Air Defense System (IADS) of the Ukrainian military, with the highest priority targets being the nearly 100 S-300s, the most capable of the Ukrainian, strategic Surface-to-Air Missiles (SAM) and their respective Early Warning, Target Acquisition, and Target Engagement Radars. Conservative estimates put the total number of Kalibr missiles used against Ukraine in the low 200s, but that number changes as of writing this post, as demonstrated by the salvo of 8 Kalibr missiles against Vinnytsya International Airport:

For the scope of this article, we will not cover the export version of the Kalibr, also known as the Cub. There are 5 variants of the Russian pure Kalibr spread across three families: 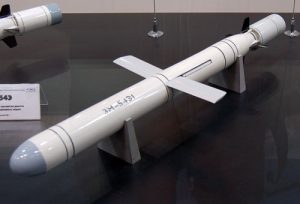 able to range out to 650km. The difference between these two is the 3M54KT has a Thrust Vectoring Booster, which reduces the missile’s minimum range and maneuverability during the boost phase. The 3M54KT is also a surface-launched cruise missile as opposed to the 3M54K which is the sub-surface launched variant. Both variants reach supersonic speed upon completion of the boost phase and have been documented to execute defensive maneuvers such as high-angle heading and altitude changes in the terminal flight phase for increased survivability against Close in Weapon Systems (CIWS).

The second family is the 3M14 (SS-N-30A), which includes the 3M14K and the 3M14T. Both are inertial guidance land attack variants deployed by the Russian Navy. The basic length of both missiles is 6.2 m, with a 450kg warhead. Its range is 2,500 km. The main difference is the 3M14K is the submarine-launched version, with subtle differences to accommodate submarine VLS cells as opposed to surface combatants. The 3M14T was reportedly the main variant used in the aforementioned strikes in Syria, as well as the ongoing strikes in Ukraine. In the weeks leading up to February 24th, the Russian Black Sea Fleet was reinforced with surface combatants from the North and Baltic Fleets that were Kalibr capable and probably conducted strikes against Ukraine.

and Borei class submarines. Surface combatants include Admiral Gorshkov,  Admiral Grigorovich, and Gepard, Buyan-M, the second batch of Steregushchy class corvettes and the Karakurt class. The Kalibr can also be launched from specialized shipping containers that can be transported via rail, commercial shipping, and truck.

There are several claims about the maximum range of Kalibr land attack versions in use by Russia. The U.S. Department of Defense estimates its range at 1,400 km, while Russian Defense Minister Sergei Shoigu put its range at “almost 1,500 km.” Following its first operational firing in October 2015, Russian Ministry of Defence statements suggested a range of 2,000 km, while a December 2015 Office of Naval Intelligence report gathered a number of Russian statements projecting ranges between 1,500-2,500 km. Either way, the Kalibr, armed down to the minor surface combatant level, presents a significant risk to the United States in a near-peer fight, who have historically enjoyed the freedom of navigation to conduct their own deep area cruise missile strikes. Some U.S. military leaders assessed the 2015 Syrian strikes as an opportunity to demonstrate its Russia’s capability.  NORTHCOM Commander William Gortney, commenting on Russia’s use of cruise missiles in Syria, told Congress that “there’s no operational or tactical requirement to do it