Sisters of Victory: The New Feminine Face of Russian Propaganda

Sisters of Victory: The New Feminine Face of Russian Propaganda

The Kremlin has rolled out some new propaganda. Young and attractive Russian women in WW2 era nurse uniforms are now being paraded around for cameras. Not much is known about the Sisters of Victory as they just popped up about a week ago. However, pro-Russian sources claim that the group is made up of women who have husbands or boyfriends who are fighting in Ukraine. They also dropped a decently choreographed music video of them singing about their support for the Russian invasion of Ukraine.

Beautiful girls from the LPR created the youth movement "Victory Sisters" and shot a good video in support of Russia ??, pic.twitter.com/VZBd3pPWra

The lyrics of the song translate into English as,

Rich in resources and expansive lands

Be glorious my dear,

Here, dignity and honor were preserved

Had a high price

Here I was born

Here I will be useful

If needed, I will give my life for

And everyone who will be in it.”

On Easter, they were seen handing out cakes to Russian forces. Notice the Z sewn into the middle of all the red crosses on their uniforms. For those who don’t know, the Z has essentially become of symbol of support for the Russian invasion of Ukraine. Many Russians on social media are criticizing the nurse costumes as cheesy and over the top. 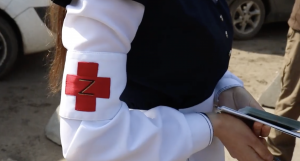 The interesting aspect of the Sisters of Victory is that they claim they are acting on their own accord. Their formation and support for the Russian invasion was done spontaneously and without instruction. Anyone who understands the nature of propaganda can see this backstory is highly unlikely.

One of the Sisters of Victory said, “My fiancé is fighting. He proposed just before leaving. He went as a volunteer. In 2014, we decided that we will never leave our motherland. Him there, me here. So, we are helping our motherland, our republic, and our brotherly state Russia.”

Another said during an interview, “My history is repeating itself. My father volunteered on the front. I was little. So, when the first signs of Ukrainian aggression began, my mom and I had to leave. My father stayed; he went voluntarily. He was the first one to remove the Ukrainian flag. Now I’m grown up and my boyfriend volunteered too. That’s why I didn’t want to sit around doing nothing, so we’re doing everything we can, by ourselves. We are gifting kindness, love, and smiles to our soldiers.”