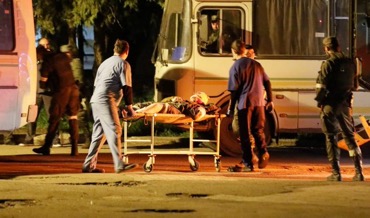 As of 1240 EST, the Russian Investigate Committee has released several statements vowing that nationalists of the more than 250 surrendered persons will be sorted out, interrogated, and investigated for crimes against the people of the Donbass.

Ukrainian Deputy Defense Minister Malian has told press that 53 service members evacuated into Russian custody are in “grave” condition with another 211 in satisfactory condition. However, the Russian Defense Ministry has confirmed only 256 people have left the Azovstal Steel Plant, with 51 Ukrainian soldiers.

Ukrainian Deputy Prime Minister Vereshchuk has stated that the next phase of evacuations are still being planned with prisoner exchanges once Russian authorities can confirm the conditions of the worst injured have been stabilized. Wives of several Ukrainian soldiers told Sky News earlier today that thousands of Ukrainian soldiers are still in the plant and are desperate for news.

Yesterdays order from the Ukrainian Genera Staff to “save the lives of personnel” is apparently being carried out. The Telegram Channel of the Azov Battalion stated today that the order is being carried out, however there has not been confirmation of the status of the remaining fighters.