The Ukrainians Still Living in a School’s Basement

The Ukrainians Still Living in a School’s Basement 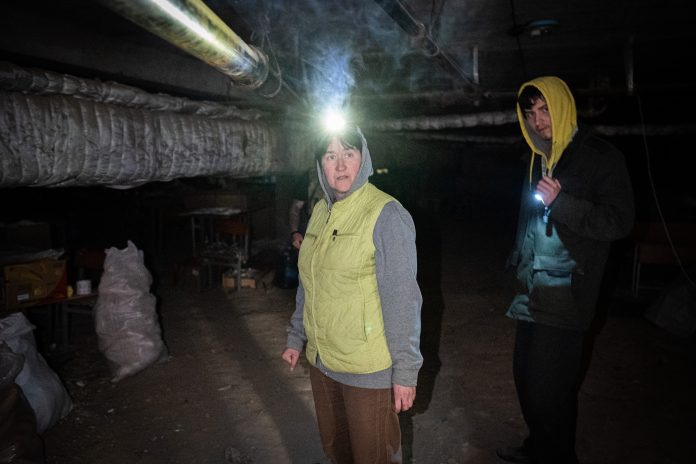 On the Northern edge of Kharkiv, the majority of the combat has recently stopped but there is still occasional bombardment of the area. Anton ­­— a powerlifter before the war — was the Ukrainian soldier who took us up there. I later found out he grew up in the destroyed neighborhood he was showing us. Similar to most Eastern European cities, the neighborhood is made up of numerous identical, grey rectangular apartment buildings.

The air was crisp, and the sky streaked with transparent slivers of clouds. The weather made for a perfect spring afternoon. This was an odd contrast to the crumbling buildings, concrete littered streets and the uncleared mines that were supposedly scattered about. The deep thumps and splintering crashes of nearby bombardments would occasionally cut through the air as a reminder in case we forgot we were roughly three miles from the frontlines.

After walking around for a bit, I asked Anton if we could go inside one of the buildings. He said he would take us to where people were still living. We then came upon a school. There was a wide gate in front. Anton banged on the bars and soon a woman emerged from a dark doorway halfway in the ground. She had on a lime green vest and a headlamp. She led us down into the basement of the school.

It was dark and cramped with dirt floors. We were taken to meet those who were still living in the basement. Their beds and personal effects were scattered all about. I learned they had been living down in the basement for three months. When the main invasion started back in February, some in the apartment buildings around the school fled to the basement to seek refuge from the Russian bombings. Overtime, they would venture out from their new subterranean home to grab things from their apartments which they would bring back to furnish their new living space.

At the start of the war, there were three hundred people living in the school’s basement. They lived down there through the worst of the battle of Kharkiv. That means horrifically intense Russian bombardments and infantry combat just outside their new home. It wasn’t long until I learned the stories of who’s apartment building had taken direct hits, how many hits and also who they knew who perished. Yet these people still smiled when I met them.