The FBI has determined that cell towers outfitted with equipment from the Chinese tech giant Huawei is “capable of capturing and disrupting highly restricted Defense Department communications, including those used by US Strategic Command, which oversees the country’s nuclear weapons,” according to CNN, who cited several unnamed security oficials. The equipment in question is Huawei technology that was outfitted to cell towers of small communications providers across the midwest. The selling of tech to said rural providers was unprofitable to Huawei, which raised further questions. The tech was supposed to be removed following approval from Congress in 2020, but has not yet due to lack of funds.

This comes as an exclusive report by Reuters stated that the Commerce Department had launched an investigation into Huawei over “concerns that U.S. cell towers fitted with its gear could capture sensitive information from military bases and missile silos that the company could then transmit to China.” Such information would include “sensitive data on military drills and the readiness status of bases and personnel.”

Back in 2020, the Federal Communications Commission (FCC) designated Huawei and ZTE as national security threats. Both reports highlight further concerns American officials have expressed over Chinese corporations buying up land for building projects in close proximity to key United States military installations, such as Laughlin Air Force Base in Texas and Grand Forks Air Force Base in North Dakota. 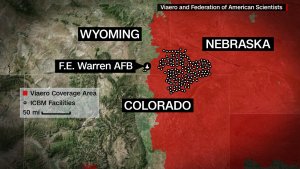 The concept of China using commercial infastructure for espionage within the United States has gained attention over the past decade. In 2011, Chinese telecoms provider Viaero installed live feed cameras on Huawei cell towers along Interstate?25 in Colorado and Montana, which they said was to provide weather and traffic updates, however, intelligence officials said it monitored the movement of American military equipment moving to and from bases in the area, as well as ICBM facilities. The FCC then ordered telecom companies who receive federal subsidies to provide cell service in remote areas to remove Huawei and ZTE technology after the I-25 investigation was briefed to the White House.

Likewise, in 2017, federal authorities cancelled a $100 million plan by the Chinese government to build a Chinese garden at the National Arboretum in Washington DC over suspicions of SIGINT operations. Authorities became suspicious after the plan involved the construction of a 70 foot pagoda on one of the highest point of the area, in which Chinese officials wanted to build the pagoda with materials shipped in diplomatic pouches, which US Customs officials are barred from examining.

The Chinese government has denied any wrongdoings in all accounts, but fears of espionage continue to be stoked.