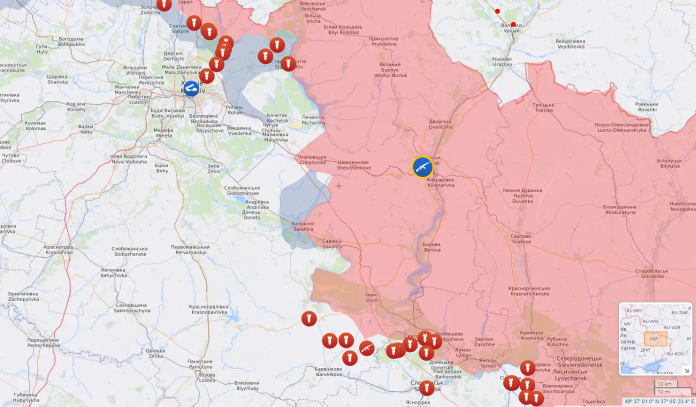 Within the last 24 hours, the Ukrainian Armed Forces have launched a counteroffensive in Eastern Khakriv. According to the Ukrainian General Staff Morning report on 08SEP22, Ukrainian forces have advanced nearly 50km and liberated 20 settlements. Yesterday’s reporting of nearly 2,000 Russian soldiers surrendering with their commanding officer has not been refuted by official Russian sources and still stands uncorroborated. However, based on recent reporting of the forward line of troops of the Ukrainians, the report seems more and more accurate. Pro-Russian sources have admitted that Ukrainian troops have penetrated at least 20-30km into Russian occupied territory. The counteroffensive has been spearheaded by the 92nd Brigade, 25th Airborne Brigade, and 80th Airborne Assault Brigade, according to President Zelensky in a thank you message.

As of 0530 EST on 08SEP22, The Fire Information for Resource Management Systems has registered more than 6 large conflagrations IVO Shechenkove, indicating heavy Ukrainian shelling and possibly infantry attacks. This official report was corroborated by several reports from Pro-Russian and Pro-Ukrainian social media accounts. Russian war correspondents claimed that reserve troops were mustered and blunted the Ukrainian advance near Shevchenkove. However, battles were also being documented near Hrushivka. Russian social media accounts also reported that Ukrainian troops were a mere 2km from Kupyansk where a pitched battle was taking place. This is the same village that this publication reported was preparing tis citizenry for combat by stockpiling food and water48 hours ago. The Russian appointed administration of the city announced that women and children will be evacuated to Russia, reportedly to join the nearly 200,000 Ukrainian citizens that have been “evacuated” since the beginning of the war.

Servicemembers from the Ukrainian 92nd Brigade published footage of the capture of several Russian soldiers IVO Balakliya which is being mopped up after the reported surrender. However, there seems to be a contingent of Russian soldiers hanging on in the village, facing complete encirclement. In fact, several Russian war correspondents have claimed that Russian Ground Forces still maintain control over the settlement. The United Russian Party has severed the delivery of humanitarian aid to Izyum, Balakliya, and Kupyansk due to the ongoing fighting.

The next 24-48 hours will undoubtedly show more Ukrainian gains as they traverse uncontested rural terrain. However, when their forces enter major settlements along ground lines of communication, stiffer resistance can be expected now that the offensive is well known. The initial shock to National Guard troops has been dealt. However, this offensive does demonstrate the operational surprise the Ukrainians have been able to spring on the Russian Ground Forces who have been desperately trying to fill gaps in the Kherson defensive line, so much so that they have neglected the occupied territory in Kharkiv Oblast with the positioning of untrained National Guard troops. The spirited defense of Bakhmut and Soledar has undoubtedly absorbed the attention of RGF which must now scramble to reallocate exhausted troops to Kherson and Kharkiv.

Russian affiliated sources have also warned of Ukrainian deployment IVO Lyman, Donetsk Oblast in an attempt to encircle Izyum, which may be the operational objective ot this counter offensive. Izyum has served as a main logistical hub for Russian forces in Donetsk.

To highlight the exhaustion of RGF in Ukraine,  Russian Governor Synehubov, Khabarovsk Krai announced today that a second battalion is to be raised, named after General Korf, to fight in Ukraine. This replenishment of forces from the Eastern Military district shows the unwillingness of the Russian Federation to enact a general mobilization and conscription of citizens in major population centers. Putin continues to pull forces from outlying areas in order to replenish losses that the Ukrainians are reporting as 50,610 killed, 2,097 tanks destroyed, along with 1194 artillery pieces, 237 aircraft, 208 hecliopters, and 209 missile launchers.