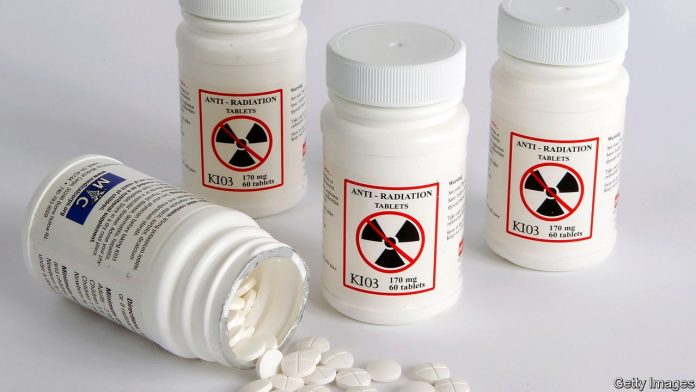 Ukraine, Kyiv (AP) The city council of Kyiv says it is providing evacuation centers with potassium iodine pills in preparation for a possible nuclear strike on the capital, Ukraine’s largest city. This comes among rumors and claims of Russian movement of nuclear weapons, and after warnings by defense analysts due to suspected movements of a Russian nuclear train.

Potassium iodine pills can help block the absorption of harmful radiation by the thyroid gland if taken just before or immediately after exposure to nuclear radiation. The pills will be distributed to residents in areas contaminated by nuclear radiation if there is a need to evacuate, the city council said in a statement.

Russian President Vladimir Putin has said that he would “use all the means at our disposal” to win the war while his ground forces retreat from a Ukrainian counterattack.

In addition, the head of the company operating Europe’s largest nuclear plant says Ukraine is considering restarting the Russian-occupied facility to ensure its safety as winter approaches. In an interview with The Associated Press on Tuesday, Energoatom President Petro Kotin said the company could restart two of the Zaporizhzhia Nuclear Power Plant’s reactors in a matter of days.

“If you have low temperature, you will just freeze everything inside. The safety equipment will be damaged,” he said. Fears that the war in Ukraine could cause a radiation leak at the Zaporizhzhia plant prompted the shutdown of its remaining reactors. The plant has been damaged by shelling, prompting international alarm over the potential for a disaster.