Over a Dozen Killed in Afghan Tunnel Fire

Over a Dozen Killed in Afghan Tunnel Fire 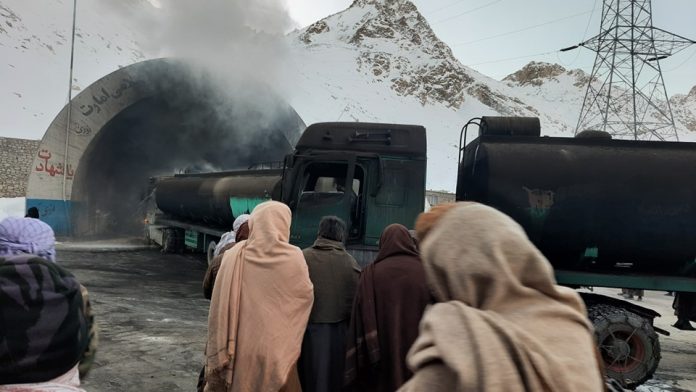 At least 19 people have been killed and over 30 others injured after a fuel truck caught fire in the Salang Tunnel, which sits north of Kabul, late Saturday night, according to Parwan governor spokesman Hikmatullah Shamim. Death toll numbers are expected to rise and it remains unclear what started the fire.

Afghanistan — Taliban say that 9 people were killed and more than 30 people were injured in the incident last night in the Salang tunnel where an oil tanker caught fire.

The tunnel seems extensively damaged in this incident. pic.twitter.com/Gu86DzI5EC

The tunnel was constructed in 1964 to connect the Parwan and Baghlan provinces through the Hindu Kush mountains at the Slang Pass. Its construction allowed for a year round route connecting northern and southern Afghanistan, which now sees heavy use in the transportation of fuel, goods, and people.

The tunnel was also the scene of a 1982 fuel truck explosion and fire involving a soviet military convoy, which has been considered by some to be the deadliest road incident in history. Casualty counts range widely, as the Soviets reported up to 172 dead while Western media reported over 3,000 dead.

On Saturday evening, an oil tanker caught fire and exploded in the Salang Tunnel in northern Afghanistan, killing over a dozen people and injuring more than 37 others.

The casualties are expected to rise. pic.twitter.com/KrAv0SRnMT

While many details are uncertain, one factor has not changed between 1982 and now, which is that the tunnel has no ventilation system. Due to this, many of the casualties were likely from suffocation from smoke and fumes.