Well known climate activist Greta Thunberg has been detained by German authorities while protesting the expansion of a coal mine in North Rhine-Westphalia, as protesters clashed with police. 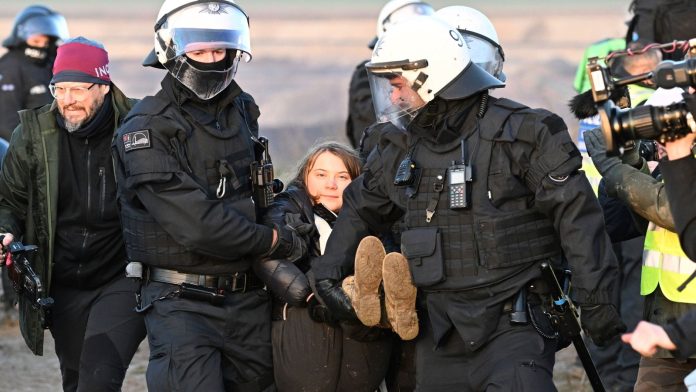 Tens of thousands gathered to defend the village of Lützerath over the weekend in an attempt to stop the expansion of the nearby Garzweiler coal mine. Among them was Swedish climate activist Greta Thunberg, who joined the demonstrations on Friday as protestors marched through nearby villages an attempted to reach the edge of the coal mine.

The protests briefly turned violent with fireworks reportedly being shot by protesters while police deployed water cannons and batons to disperse the crowds.

About 300 activists have been detained and removed by German police in an operation launched on the 11th of January in order to clear the surrounding area for demolition. Greta Thunberg is reported to have been detained as well, having been photographed in police custody.

The village of Lützerath specifically was ordered to evacuate in 2017 to make room for the mine, but since at least 2020 climate activists have been squatting in the area to prevent the expansion of the mine, of which they claim will cause major greenhouse gas emissions. The group LuetziBleibt, meaning “Luetzi is Staying” claims there were “around a couple of hundred people” living in the village in protest.

In exchange for the mine expansion, the German energy company RWE has promised the German government that they will remove coal from it’s power supplies by 2030. They’ve also cancelled plans to further expand the mine beyond this new construction.

However, protestors claim this undermines the German government’s pledge to lead the charge on handling climate change. Lignite coal, which is what is mined in Garzweiler, is regarded as the most pollutant fossil fuel.

Speaking to the rally on the 14th of January, Thunberg said Germany was “embarrassing itself”. She added, “and if one of the largest polluters, like Germany, and one of the biggest historical emitters of CO2 is doing something like this, then of course it affects more or less everyone — especially those most bearing the brunt of the climate crisis.”

“It’s very weird to see the German government, including the Green party, make deals and compromise with companies like RWE, with fossil fuel companies, when they should rather be held accountable for all the damage and destruction they have caused,” Thunberg said.

“My message to the German government is that they should stop what’s happening here immediately, stop the destruction, and ensure climate justice for everyone.”