Tomorrow is election day and based on Real Clear Politics (RCP) polling data, it appears that Republicans will triumph.  Republicans would hold 53 Senate seats and Democrats would hold 47 seats if each party prevailed in the races in which they are currently expected to win. Additionally, if the same incident occurred in the House, Republicans would take home 227 seats while Democrats would take home 174, with 34 seats still undecided. For context, Real Clear Politics is a firm dedicated to averaging polls from Republican, Democrat, and Independent-sponsored polling firms.

This election might not mirror the elections like those in 2010 (when Republicans gained 63 House seats) or 2014. (when Republicans picked up 9 Senate seats). It appears to be more of a “red ripple” in contrast, but a red wave is still feasible.

Only educated guesses can be put forward at this point. It’s common for polls to deviate a few percentage points from the actual result (this is normal and just a reality of our uncertain world). Dating back to 1998, polls of U.S. Senate elections conducted within 2 weeks of election time, have had an average margin of error of 5.4 points, and House elections have had an adjusted error margin of 6.3 points.

Let’s consider what would occur if a typical polling inaccuracy favored Republicans, considering this is a Democratic-White House-lead-election Of course, the polling error will vary depending on the race in reality. However, let’s imagine that Republicans win every Senate contest by 5.4 points and every House race by 6.3 points more than their current forecasted vote margins. This roughly occurred in 2020, when surveys significantly underestimated the GOP’s support. Republicans would take home 54 Senate seats in this scenario. The GOP would win New Hampshire, Georgia, Nevada, Arizona, and Pennsylvania.

Below are the most current projections, in conjunction with the unknown standard deviation of polling numbers. According to the data, it’s not IF the GOP will win, but merely, how much will be gained. A sweep is more possible now that Republican dominance is at 70% according to betting markets: 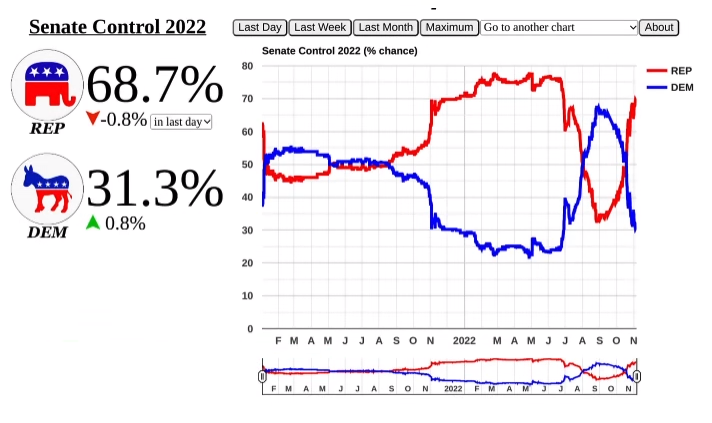 The party in the wave typically wins close Senate races, according to the same 1998 historical data on elections for the Senate. For instance, it recently occurred in 2006 and 2010.

Johnson (R) is sitting pretty with the polling data as it stands. Out of an average polling split of 100 people, Johnson stands at a 49.8 average. This won’t be down to the wire, according to the polls from Real Clear Politics. The Hidden Voter Phenomenon I highlighted is a deciding factor in the Midwest, where polls frequently underestimate Republicans. However, this is a prime illustration of individuals who are locked in the polling range and may believe Johnson and Murray are in the same situation. Given the national environment, they are not.

The RCP average for the Republican candidate Adam Laxalt is 47.6 as of now. For Rs, this could be carried away relatively easily. In Nevada, Democrats appear to be essentially uncompetitive as the lead has been consistently growing for Laxalt. In terms of Republican voters, Nevada and Arizona profited from California’s recent departure of Rs, and it could make all the difference come tomorrow.

In one of the most widely watched senate races, Pennsylvania is coming down to the wire. John Fetterman (D) stands at 46.9, while Mehmet Oz (R) sits at 47.0. Oz has picked up steam with polling firms after his debate with Fetterman, and he now has a slight lead heading into Tuesday.

Raphael Warnock (D) and Herschel Walker (R) are neck and neck as the final polls come in from RCP. If there was any race in this election that will go to a run-off, it’s probably this one unless the Peach State silent voters show out and push either over the line. From the data that’s been shown, it’s more than likely that this will go to a runoff. Betting markets from PredictIt have this race as the most likely to be the closest, as of this writing.

This is also a very close race. Kelly (D) is at +0.6 with the polls stating a statistical dead heat. However, RCP states that Masters (R) supporters are undercounted and will show up tomorrow to push him over the edge. This will be a coin flip of a race.

This race is spicy. Bolduc has quite a record. He has been awarded the Defense Service Medal, the Defense Superior Service Medal, Legion of Merit, Army Commendation Medal with Valor Device, and numerous awards from our allies. Hassan has a solid record of her own as the incumbent senator. While the race is definitely in the margin of error, Hassan has held a slight lead over the past month with the +1.4 differential in her favor. Do not be surprised if Bolduc manages to pull it out, as he made some huge gains in recent months to bring the polls within the 1.4 margin.

According to the data, the GOP will make some large gains tomorrow and pick up a healthy amount of seats for the next cycle. There isn’t much debate for the GOP taking back the House. Even the more democratic-leaning polls are calling for a GOP win on Tuesday. While nothing is for sure, midterms usually tend to swing the opposite of whoever sits in the White House. And with the Senate being tied right now, it’s not outlandish to think that GOP will take control of both chambers.

Stay tuned tomorrow. We will keep you updated on election results as we get them, through the BRIEF.

Atlas News is committed to remaining independent, unbiased, and unfiltered. Consider subscribing today to help us grow and bring you quality news you can depend on.