According to Dev Discourse and Reuters, WNBA Britney Griner has been sent to what they are calling the “IK-2 Penal Colony in Mordovia, Russia”. However, the female penitentiary in Mordovia, nearly 500km southeast of Moscow is IK-14. IK-2 is only 80 miles East of Moscow. Although these locations conflict, it is clear that State Department negotiations have failed to secure the release of Griner and she will begin her nine year sentence. 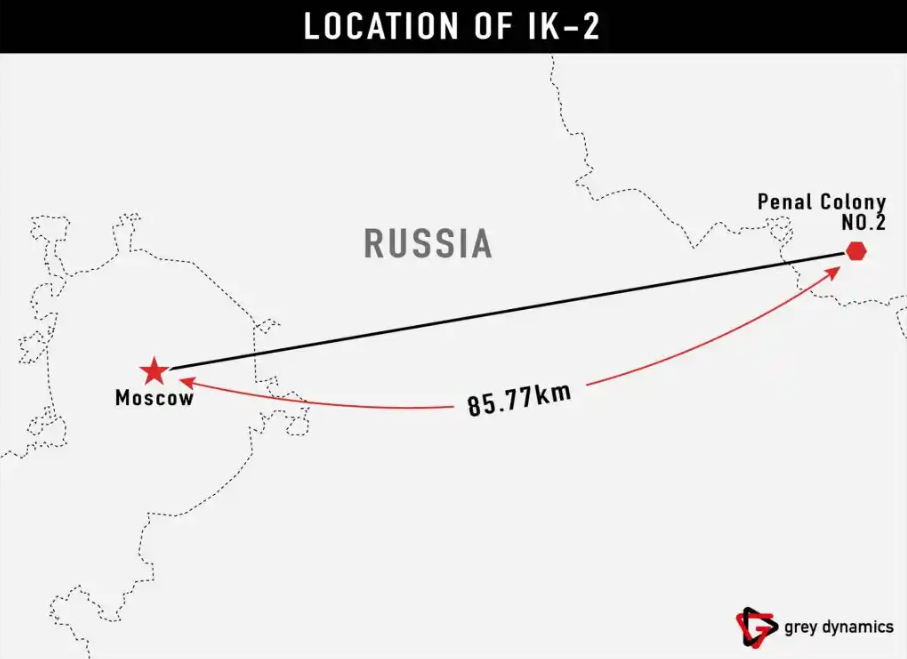 IK-2 is traditionally reserved for political prisoners, drug crimes, and national activists, so Griner may be sent there. The IK-2 is currently hosting 800 inmates, including Alexei Navalny. The structure comprises twelve different units: one with ease conditions, 10 with normal conditions, and the last one with strict conditions. There is also a paint shop, a sewing production in the industrial zone, an assembly shop and a carpentry. According to Grey Dynamics:

“According to former inmates, the day starts at 6 am. All the inmates have to recite the Russian national anthem. To follow, there is physical exercise. Prisoners have to memorise the list of the prison employees and make and unmake the beds for three hours. The activists are the ones who usually assign these tasks to the inmates. They also have the power to beat and search an inmate. Prisoners always have to stay on their feet, until 10 pm when they have to go to sleep.

The inmates rarely have personal time. Sometimes they can sit and read for half an hour, but most of the time, political inmates do not enjoy this privilege. The routine is either working all day or spending many hours watching government advertisements on the TV without looking away from the screen and with their hands tied behind their back.

The inmates cannot receive emails and the prison guards have to read and check all the letters that the inmates receive. This process can also last weeks, and sometimes months, and its purpose is to isolate even more the prisoner from the outside world. The inmate has 30 minutes a week to reply to all the letters, and a guard has to sit with him and check what he writes.

There are cameras and guards everywhere and the prison guards monitor the conversations on the phone and also the ones with lawyers. These phone calls are allowed twice a month and they cannot last more than 15 minutes. Nothing of what happens in the colony can be said or written to the loved ones.”

However, if it is IK-14 , Griner is slated to be a prisoner at one of Russia’s most notorious female prisons. Pussy Riot member Nadezhda Tolokonnikova said the reputation of prison IK-14 was known across Russia.

“As the inmates say, ‘If you haven’t done time in Mordovia, you haven’t done time, ” said Tolokonnikova, who herself served prison time at the facility in 2013. Multiple investigations have been opened into accusations of slave labor at IK-14 where women work 17 hour days in sweatshops creating cheap textile goods. Other accusations of psychological and physical abuse include full body cavity searches, beatings, torture and killing of domestic animals, and other atrocities.

557,684 individuals are incarcerated in Russian correctional facilities. Of these, 44,474 are women. The media sources above will have to clarify if they meant IK-2 or IK-14, but both are brutal prisoners which will be a shock to the American WNBA player.

In August, Griner was sentenced to nine years in a penal colony on drugs charges following her arrest at a Moscow airport in February with vape cartridges containing cannabis oil in her luggage. She was moved from a detention centre near Moscow on Nov. 4 to be taken to an undisclosed prison location.