Some photos have emerged on Chinese social media showing two new prototypes of PLAAF J-20 “Mighty Dragon” stealth fighters, one of which is a twin seater, during flight testing. 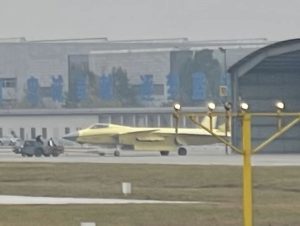 The single seat version is suspected of being an enhanced J-20B, which has a noticeably different airframe around the canopy in what is likely an attempt to improve aerodynamics.

As for the twin seater, the photos are too blurry to discern anything new compared to previous versions we have seen, but we know that this variant is being developed for electronic warfare purposes and to be integrated with GJ-11 combat drones that will act as “loyal wingmen.”

For those who don’t know, the yellow is an anti-corrosion Zinc-Chromate primer, which is used to protect the aluminum airframe before it gets its final paint job. Some other primers are green. With that being said these aircraft will not be yellow when they enter service.

In an interview on Wednesday with the Financial Times...

On Thursday, the United States Pentagon announced that an...

The United States Embassy in Tanzania issued a terrorism...