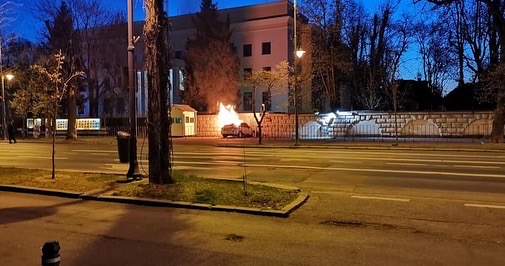 One person is dead after a man crashed his vehicle into the Russian embassy in Bucharest, then self-immolated. The fire was borough under control by public safety officials, and only superficial damage was done to the embassy.

The Russian Federation Council, specifically Mr. Djabarov, has warned their citizens against international travel, especially to Romania and other NATO countries.

Russian Investigative Committee leader Bastrykin, has declared this a terrorist act, brought on by Western provocation and “anti-Russian hysteria”.

Russian Ambassador to Romania, Kuzmin, has also declared this a terrorist act.

Local Bucharest media has declared the attacker did so “a day after he was convicted of raping his daughters, Bogdan Drâghici , the head of the TATA association.” If true then it is worth noting that Bogdan Drâghici has been in court since last August due to his wife accusing him of a ten-year period of molesting their daughter.

T.A.T.A (Alliance Fighting Discrimination Against Fathers), not to be confused with India’s TATA group) is an NGO that has been fighting for years for equal rights between moms and dads in the family, with several actions taken to court on this issue. The NGO has lobbied for the establishment of Father’s Day in Romania and has filed several complaints at the National Council for Combating Discrimination on several stands allegedly taken by the authorities against fathers.

Previous article
Russian Teens Jailed For Blowing Up A Building of the FSB In Minecraft (Turned Into NFT) And Terrorism Charges
Next article
Yemen’s Civil War: Intro to the World’s Worst Humanitarian Crisis