I had been wanting to do an article breaking down the main hypersonic weapons that have emerged with the United States, Russia, and China for a while now, so I might as well do it now.

Before we start, I want to correct some misconceptions. There is this notion that in order to be a hypersonic weapon, it just needs to travel at or in excess of Mach 5, which is 3,800 miles per hour, but this is really not the case. The definition of hypersonic weapons nowadays has two criteria, which is that it must travel at or over Mach 5 and that it must also be maneuverable (both vertically and horizontally) within the atmosphere. So with that being said, there are hypersonic weapons and weapons that move at hypersonic speeds. The latter have been around for many decades and a perfect example would be intercontinental ballistic missiles (ICBMs), such as the United State’s LGM-30G Minuteman III, which can travel at Mach 23 (17,500 mph). The reason why most missiles are not considered “hypersonic weapons” is because missiles follow a predetermined, arched trajectory and lack maneuverability within the atmosphere. I understand that the definition is a bit muddy, but roping in ICBMs and hypersonic cruise missiles into the same boat does not do their differences any justice. 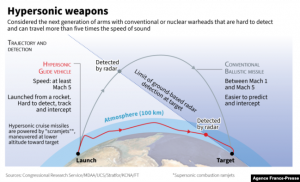 There are essentially two different kinds of hypersonic weapons: cruise missiles (HCMs) and glide vehicles (HVGs). In short, hypersonic cruise missiles travel at a constant speed and altitude for the duration of their flight utilizing scramjets (supersonic combustion ramjets). Scramjets are “air breathing,” meaning that they constantly take in surrounding air for their combustion and do not need an oxidizer like other rocket and missile systems. Glide vehicles work by being placed on top of rockets that are launched to a high altitude at great speed, where they then decouple and glide back to Earth. HVGs do not have any propulsion mechanisms that can generate thrust, meaning they gain hypersonic speed from the rockets themselves and can travel at speeds in excess of Mach 20 depending on the rocket they are attached to. HCM and HVG’s speed and maneuverability make them practically impossible to track and intercept. To date, there are no existing methods to shoot them down.

I know a lot of people are going to call bullshit on those last two sentences, but it is true. Whenever I post about hypersonic weapons, I always see the “what about lasers” comment. At present, there are no laser interceptors that can down large missiles, let alone hypersonic ones, in operation. The closest thing we have right now are the United States Navy’s AN/SEQ-3 Laser Weapon System and Israel’s Iron Beam, both of which have been proven useful in engaging drones. The Iron Beam has also been used during testing to intercept rockets and mortars. Either systems, in their current state, are not capable of taking down missiles. This is largely due to the strength of the laser needed and the amount of time it is on target to produce enough heat to cause critical damage. This is not all to say laser technology to counter hypersonic weapons isn’t in development, but right now there are none in serviceable condition to do so.

With that out of the way, I am going to get into each country’s capabilities.

The United States has been trying to develop hypersonic weapons for decades, but have never been able to field one largely due to lack of funding and development issues. To date, the United States does not have any serviceable hypersonic weapons that have been implemented in its armed forces outside of testing. Due to this, the United States is trailing behind Russia and China, who both have serviceable hypersonic weapons. Last time I said this it pissed off a bunch of people and to those people, you have to understand that under development does not mean serviceable in the field. Rest assured, there are several ongoing experimental programs underway, but in the words of the chief executive officer of Raytheon Technologies Corp., Gregory Hayes, “At least, we are a few years behind” compared to Russia and China. With that in mind though, the question of quality and reliability come into play, but I will get to that later.

According to the Congressional Research Service, “Funding for hypersonic weapons has been relatively restrained in the past; however, both the Pentagon and Congress have shown a growing interest in pursuing the development and near-term deployment of hypersonic systems. This is due, in part, to the advances in these technologies in Russia and China, both of which have a number of hypersonic weapons programs and have likely fielded operational hypersonic glide vehicles potentially armed with nuclear warheads. Most U.S. hypersonic weapons, in contrast to those in Russia and China, are not being designed for use with a nuclear warhead. As a result, U.S. hypersonic weapons will likely require greater accuracy and will be more technically challenging to develop than nuclear-armed Chinese and Russian systems.” The Government Accountability Office has reported that funding for hypersonic weapons programs increased 740 percent from 2015 to 2020 with a total of $15 billion not including production costs.

So with all that funding, what’s cooking in the stu? On April 5, the United States Defense Advanced Research Projects Agency (DARPA) announced a second successful flight of the Hypersonic Air-breathing Weapon Concept (HAWC). In a statement posted to their website, DARPA stated that “The vehicle, after release from a carrier aircraft, was boosted to its Aerojet Rocketdyne scramjet engine ignition envelope. From there, it quickly accelerated to and maintained cruise faster than Mach 5 (five times the speed of sound) for an extended period of time. The vehicle reached altitudes greater than 65,000 feet and flew for more than 300 nautical miles.” DARPA also stated that the latest HAWC test was done so using a Lockheed Martin version, which program manager Andrew Knoedler said the “flight test successfully demonstrated a second design that will allow our warfighters to competitively select the right capabilities to dominate the battlefield.” The test was done sometime in March, but was not revealed in an effort to not further escalate tensions with #Russia. 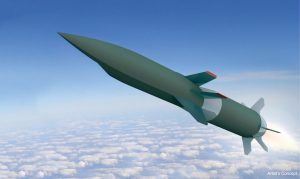 Last September, DARPA announced the successful testing of the Raytheon version of the HAWC, stating that the weapons system “could strike targets much more quickly than subsonic missiles and has significant kinetic energy even without high explosives.” President of Raytheon’s Missiles & Defense business unit, Wes Kremer, stated that “The Department of Defense has identified hypersonic weapons and counter-hypersonic capabilities as the highest technical priorities for our nation’s security,” according to Reuters.

Some other hypersonic weapons currently in development include:

The AGM-183 program has been plagued with issues. The system is supposed to be a glide-boosted weapon, meaning that the entire weapon uses rockets to reach speeds of Mach 20 before an integrated glide vehicle releases and heads towards the target. Development began in 2018 with Lockheed receiving nearly $500 million in funding and initial testing proved to be optimistic, with President Trump touting it as the “Super-Duper Missile.”However, when it came to test flights, all three failed in 2021. Last month, the U.S. Air Force signaled that no plans to buy ARRWs in its 2023 budget after already cutting funding to the program by nearly a half. As of right now, the project isn’t dead, but it faces frequent setbacks and delays. If all goes well the ARRW is expected to have early operational status by next year.