U.K. Provides Another 1.3B GBP Military Aid Package to Ukraine

U.K. Provides Another 1.3B GBP Military Aid Package to Ukraine

United Kingdom Prime Minister Johnson held a phone call with Ukrainian President Zelensky today which confirmed the May 9th  announcement of a 1.3B GBP aid package to the war-torn country. Since the Russian Federation initiated its invasion on February 24th, 2022, the Ukrainian military has depleted many strategic anti-air, anti-ship, and surface-to-surface missiles. Not to mention the effects of Russian strikes which have severely degraded the Integrated Air Defense System (IADS) of Ukraine. Of the original 100 Transporter Erector Launchers of S-300, Ukraine has an estimated 35 remaining that are still operational. This aid package is meant to re-arm Ukraine with much-needed cargo drones, anti-ship missiles, and long-range artillery.

From the U.K. Government Press Release:

The Prime Minister spoke to Ukrainian President Zelenskyy today to discuss a range of issues, including military support and global food security.

President Zelenskyy updated on the situation in the Donbas and the ongoing fight to regain all of Ukraine’s sovereign territory and counter Russian disinformation in contested areas. The Prime Minister stressed his undimmed admiration for the brave defenders of Mariupol and urged Russia to treat any prisoners of war with dignity and respect.

Noting the recent announcement of an additional £1.3billion in UK military aid for Ukraine, the Prime Minister set out the support flowing to Ukraine’s defence, including long-range artillery, shore-to-ship missiles and unmanned drones.

The leaders discussed progress in negotiations and agreed to step up work with allies, including the US, France and Germany, to define the longer-term security architecture for Ukraine.

The Prime Minister raised his significant concerns about the growing global fallout from Russia’s illegal invasion and President Putin’s craven and reckless blockade of Ukraine’s Black Sea ports, including rising food prices in developing countries. They looked at options to open up critical sea and land supply routes for Ukrainian grain stocks, and committed to direct their teams to work urgently on the next steps.

The Prime Minister closed by congratulating President Zelenskyy on the occasion of Vyshyvanka Day and reiterating the United Kingdom’s steadfast solidarity with the people of Ukraine.

made by London-based Malloy Aeronautics. The quadcopter can deliver up to 68kg up to 70km at a sustained speed of 30 m/s. These drones have been used in forward-deployed areas to transport ammunition and medical supplies to front-line units. These drones have also been documented as being utilized as rudimentary mortars. By using the onboard electro-optical/ infrared camera, and attaching a bomb release mechanism, the T-150 can drop small warhead munitions. 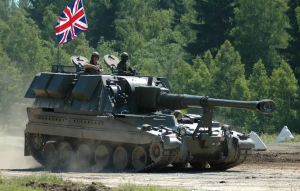 90 (“Artillery System for the 1990s”), known officially as Gun Equipment 155 mm L131, is an armored self-propelled artillery weapon. Ukraine currently fields a good-sized set of 2S19 MSTA-S, 2S5 Giatsint-S, 2S3 Akatsiya, and other systems like the newly arriving 152mm self-propelled guns from the Czech Republic. The arrival and training with these systems will supply the Ukrainians with the tactical weaponry to conduct offenses against Russian forces in Eastern Ukraine, keeping with President Zelensky’s comments today that: “we will eventually retake all cities currently occupied by Russian forces.” 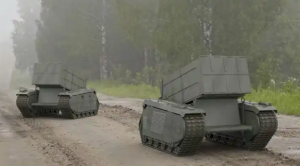 launched ground attack missile developed by MBDA UK for Britain’s Royal Air Force. It was originally intended for “fire-and-forget” use against mass formations of enemy armor, using a millimeter wave (mmW) active radar homing seeker to ensure accuracy even against moving targets. Since the fall and or blockades of all of Ukraine’s military ports, and the suppression of their air defenses, the former Soviet-Bloc nation only has approximately four Neptune anti-ship missile launchers still operational. This shipment is meant to bolster Ukraine’s ability to defend key port cities such as Odesa from further Russian strikes.

As the war in Ukraine enters its next phase of Russian offensives from Izyum, to secure the declared borders of Donetsk Peoples Republic and Luhansk Peoples Republic, the Ukrainian Armed Forces have the opportunity to go on the offensive in several areas. As we have already seen in the last 48 hours, Ukrainian troops have crossed the Russian border in areas North of Kharkiv where they have carried out operations against Russian villages. These offensive weapons provided by the U.K. and other Western states will allow the Ukrainians to do just that.