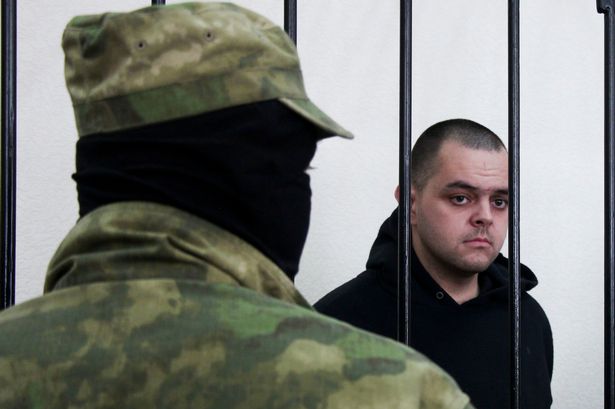 The execution of British national Aiden Aslin, who has been serving with the Ukrainian military for four years, will go ahead as planned after he was sentenced to death by the Donetsk People’s Republic (DPR), according to family members who spoke with the BBC.

Aslin’s grandmother, Pamela Hall, told the BBC that he had called his family to inform them that the execution will happen and that the UK government has done nothing to intervene or negotiate on his behalf.

“There are no words, just no words, it’s got to be everyone’s worst nightmare to have a member of your family threatened in this way,” Hall told the BBC.

“Aiden was extremely upset when he called his mother this morning. The bottom line is Aiden has said the DPR has told him nobody from the UK has made contact, and that he will be executed,” adding “I have to believe what Aiden has said to us, that if the DPR don’t get some response then they will execute him. Obviously I hope that isn’t true.”

Shaun Pinner, Aiden Daniel John Mark Aslin and Saadun Brahim are accused of terrorizing the people of the Donetsk People's Republic. They will face the death penalty. pic.twitter.com/FabyGknoBC

On June 9, the DPR’s Supreme Court sentenced Aslin and Sean Pinner, as well as Moroccan national Saadoun Brahim, to death for what separatist officials say was “mercenary activities and actions aimed at overthrowing constitutional order.” The three were charged with various offenses, including terrorism and the “preparation and military actions against the Armed Forces of the Donetsk People’s Republic for the purpose of forcibly seizing and forcibly retaining power on the territory of DPR.” The three partially pleaded guilty to charges brought against them, but have denied being mercenaries or killing civilians.

If the execution of Aslin is to happen, it will likely also happen with Pinner and Brahim.

Aslin became well known for his volunteer service with the Kurdish YPG against the Islamic State from 2015 to 2016. In 2018, he moved to Mykolaiv, Ukraine, where he met his girlfriend and soon joined the Ukrainian Marines. At this time he also received dual citizenship with Ukraine. From 2018 Aslin had been serving along the Donbas frontline until the start of the invasion, when his unit was eventually sent to Mariupol to defend the city.

Aslin and his unit surrendered to Russian forces in Mariupol on April 12 after running out of food and ammunition. At this point in the battle to take the key port city, Ukrainian resistance was limited to several small pockets held up in the south of the city and the Azovstal industrial complex. It wasn’t until May 20 when the remaining Ukrainian holdouts at Azovstal surrendered, resulting in the complete capture of the city to Russian forces.

Pinner, a former British soldier, had moved to Ukraine four years ago and had been serving within the Ukrainian military since 2018. He was also captured in Mariupol alongside Aslin.

Although both men have been enlisted members of the Ukrainian military since 2018, separatist prosecutors have accused the two of being mercenaries, a person who fights in foreign militaries for financial gain. With this, Russian-backed officials of the DPR say the two are not subject to protections granted by the Geneva Convention and are thus not considered prisoners of war. Family members and supporters of Alsin, as well as the UK government, have condemned the trial against the three as being a “sham.”

Stay in the Loop</