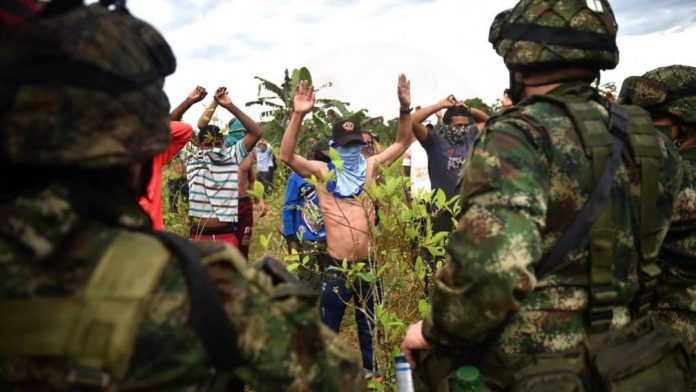 As millions of Colombian’s dream of an era of peace, after the election of left wing, former M-19 guerrilla, President Gustavo Petro, a new report, detailing the history of Colombia’s conflict, offers a manual for ending the war. The truth commission was set up to offer a comprehensive analysis of the conflict after the 2016 peace deal, which saw members of the FARC, a left wing guerrilla group, lay down their weapons after a 60 year insurgency. The commission has been working for three years to analyse the causes of the conflict, what has sustained it, document war crimes committed and offer recommendations to bring it to an end. Parts of the report were released yesterday, including a 900 page summary. The commission held an event where 1,600 people attended for the release of the report. Many members of the commission wore t-shirts which said, “There is future, if there is truth”. This is a rare moment of belief in Colombian politics, that the future might be brighter.

The Colombian conflict officially began with the leftist guerrilla insurgency of the FARC in 1964. The conflict took on a different dimension during the 90s when a number of drug trafficking groups and far right paramilitary groups formed. The far right paramilitaries themselves, while formed to fight the leftist guerrillas, became deeply involved in the cocaine trade. According to the report, the cocaine trade, Colombia being the world’s largest producer, has been one of the key factors fuelling the conflict. It is not, however, cocaine itself that is solely causing the conflict, but the Colombian state’s approach toward coca.

The report is heavily critical of Colombia’s approach to the conflict and the human rights abuses committed during it. The war on drugs is considered an utter failure. The report goes into detail on Plan Colombia, a US funded operation which began at the beginning of the 21st century. The operation saw Colombia’s armed forces expand massively as they received billions of dollars of US aid and training. The operation looked to tackle drug trafficking and the militant groups involved in the trade head on. This militaristic approach has had little effect on the cocaine trade in Colombia. A recent UN report revealed production levels are at an all time high. The war on drugs also actively fuelled the number of victims. Damning evidence shows Colombia military forces actively working with far-right paramilitaries, come drug trafficking groups, against left wing guerrillas like the FARC and ELN. These right wing paramilitaries were brutal and responsible for huge amounts of civilian casualties. While the military itself was consistently engaging in extrajudicial killings.

Plan Colombia also led to the false positive scandal. In return for the billions of dollars of US aid the Americans demanded numbers from the Colombian state, those numbers being dead guerrillas. I spoke to Toby Muse, author of Kilo, an excellent book detailing Colombia’s cocaine trade, who said this meant “the focus on the conflict became all about numbers”. This led to the false positive scandal. As a result of the obsession with numbers, Colombian soldiers began killing innocent civilians and dressing them up as guerrillas, in order to please their military seniors. A former Colombian general testified in court saying he felt “pressure to produce results, to produce false results, to make a government happy.” Muse told me “This is the legacy of Plan Colombia”.

Estimates for the number of victims of the conflict have always hovered over 200,000. The report however, estimated 450,000 are dead as a result of Colombia’s internal conflict from 1985 to 2018. This chart reveals the perpetrators of the murders. 45% were at the hands of the far-right militaries, while the FARC were responsible for 21% and state agents responsible for 12%. 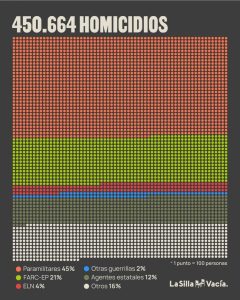 While the numbers here are important, it is the individual tragedies which mean the most. Fathers, mothers, sons and daughters have been lost in this horrific conflict, at the hands of traffickers, guerrillas, and the state military. Throughout the conference for the report, members of the crowd shouted out demanding justice for their loved ones they’ve lost. The report is built on thousands of interviews with victims of the conflict, giving voice to those whose lives have been destroyed.

The report is also deeply critical of the approach towards coca crops itself. Consistently the Colombian state, with the help of the US, has pursued a policy of crop eradication. This is either done manually on the ground or through aerial fumigation. Fumigation sees the spraying of the possibly carcinogenic chemical glyphosate. Fumigation can be extremely damaging to the local ecosystem, destroying other wildlife, contaminating water sources and harming livestock licit crops. Upon eradication most farmers would simply replant the crop, meaning eradication was stuck in a continual, failing cycle.

According to Toby Muse the price of coca for farmers in Colombia has stagnated in Colombia over the past couple of decades. This will likely create a willingness with farmers to engage with substitution programmes as the sole benefit of coca farming, money, has dwindled and no longer outweighs the constant issues of working within the illicit trade, such as engaging with drug traffickers and the threat of crop eradication.

Petro attended the conference, unlike President Duque. Petro has given public support for the report and gave a speech at the conference. Petro stated the recommendations of the report; ending the drug war, reforming the military and one interesting aspect is the end of extradition of drug traffickers and engaging peace talks with ELN, would “effectively become part of Colombian history”.

Just before the election ‘Otoniel’, alleged leader of Clan Del Gulfo, one of the largest cocaine trafficking groups in Colombia, was extradited to the US. Otoniel was threatening to reveal the names of senior military officials and politicians complicit in the cocaine trade. The level of corruption in Colombia is systemic, and these threats generated fear within Colombia’s elite. The extradition, individuals like Petro have alleged, was fast tracked to remove the threat of Otoniel revealing these secrets before the election. Petro was against the extradition. Likewise, the report calls for the ending of extraditions, saying traffickers should face prosecution in Colombia.

The report is open about the nature of corruption within Colombia and calls for drastic reforms to both the military and institutions which investigate human rights violations, and the creation of a commission to assess the role of corruption of the Attorney General’s Office. Petro has also called for reform of the military. One recommendation is the removal of the national police from the defence ministry. This has caused the militarisation of the law enforcement, which can often lead to excessive violence.

Two of Colombia’s former President’s César Gaviria and Juan Manuel Santos have spoken out against the drug war after their time in administration. For the first time, Petro will be an active President speaking against the drug war. Petro’s embrace of the report’s finding and recommendation are signs of hope for Colombia. His task is monumental, and the effects of Colombia’s ongoing conflict are far from over. However, for the first time in decades change and justice seem possible in Colombia.