While speaking in Moscow on Friday, the Foreign Minister of Transnistria, an unrecognized breakaway state from Moldova, stated that the region will pursue complete independence, with the possibility of pursuing accession into Russia. 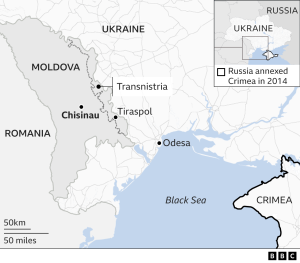 Minister Vitaly Ignatyev also said that “Having received the status of a candidate for EU membership, Moldova has thus crossed a certain Rubicon,” adding “It put an end to the issue of building political relations within certain common spaces, because this decision was made solely by the Moldovan leadership, it was not taken collectively. Moreover, no one can speak for us.”

Dmitry Belik, member of the State Duma Committee on International Affairs, responded to the announcement by saying “Today, Pridnestrovie (Transnistria) is that enclave of Moldova that does not want to be with Romania and at the same time gladly hosted the Russian peacekeeping contingent. Therefore, the proposal of Pridnestrovie to join Russia is not some kind of boundless and distant future, rather, it is a direction in the near future. And because Russian-speaking people who are close to us live there, we must consider this proposal seriously,”

Kremlin spokesman Dmitry Peskov stated “Honestly, I saw media reports, but I don’t know what it is connected with. I can’t say anything.”

Since the Transnistria War, which established the breakaway state in 1992, Russian forces have remained in the region as a peacekeeping force, called the Operational Group of Russian Forces in Transnistria, which currently consists of some 1,500 troops. One of their primary missions is to guard the Cobasna ammunition depot, which stores some 20,000 tons of Soviet-era weaponry. Moldova continues to call for the withdrawal of Russian forces from the region, which it considers illegitimate and illegal. Since the outbreak of the Ukraine Civil War and the annexation of Crimea in 2014, there had been increasing support for Transnistrian annexation by Russia.

Since the outbreak of the Ukraine invasion, Russian military officials have suggested creating a land bridge to Transnistria. Back in April, Deputy Commander of Russia’s Central Military District, General Rustam Minnekayev, announced that the invasion had entered a new “phase two,” in which the key tactical objects of military operations in Ukraine would be to secure the entirety of the Donbas region and push to capture the southern oblasts of Nikolaev and Odessa. Included in this plan is opening up direct access to Transnistria, in which Minnekayev stated “control over the south of Ukraine is another exit into Transnistria, where there are also facts pointing to the oppression of the Russian-speaking population.”

The announcement came as Transnistria faced a string of sabotage attacks targeting government and communication infrastructure, as well as the region’s airport. While Russia blamed Ukraine for the attacks, Ukraine and its western allies believed the attacks were false flags to justify increased Russian military presence, which would open up a western front against Odessa.Since then, the Russian military had not mentioned Transnistria in its tactical objectives for the invasion.