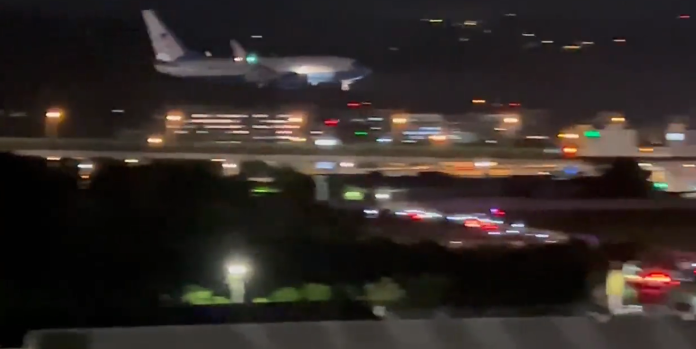 Update (1108 EST): Chinese State Owned Media CCTV has been publishing comments from several members of the Standing Committee including “There is only one China in the world” and that the tensions over Taiwan “have entered a new round extreme challenges.” Below is Speaker Pelosi’s Official Statement on the visit.

Taipei, Taiwan – Speaker Nancy Pelosi and Members of a Congressional Delegation issued this statement upon arrival in Taiwan.  This visit is the first official visit to Taiwan by a Speaker of the United States House of Representatives in 25 years.

“Our visit is part of our broader trip to the Indo-Pacific — including Singapore, Malaysia, South Korea and Japan — focused on mutual security, economic partnership and democratic governance.  Our discussions with Taiwan leadership will focus on reaffirming our support for our partner and on promoting our shared interests, including advancing a free and open Indo-Pacific region.  America’s solidarity with the 23 million people of Taiwan is more important today than ever, as the world faces a choice between autocracy and democracy.

“Our visit is one of several Congressional delegations to Taiwan – and it in no way contradicts longstanding United States policy, guided by the Taiwan Relations Act of 1979, U.S.-China Joint Communiques and the Six Assurances.  The United States continues to oppose unilateral efforts to change the status quo.”

Update (1103 EST): Taiwan’s Ministry of Defense has corrected previous reporting from Chinese social media that Su-35s have crossed the channel. However, they have admitted that other PLAAF aircraft did and are currently flying in the vicinity of Taiwanese aircraft.

Several dozen Taiwanese military aircraft have been sortied throughout the country amid reports of Chinese Coast Guard and PLAN vessels transiting the Taiwanese Strait.

(8) U.S. F-15s and at least one tanker, as well as a USAF RIVET JOINT collections plane have taken off from Kadena Air Base, Japan in the last hour.