U.S. and U.N. Call for ‘Demilitarized Zone’ In and Around Zaporizhzia Nuclear Power Plant

U.S. and U.N. Call for ‘Demilitarized Zone’ In and Around Zaporizhzia Nuclear Power Plant 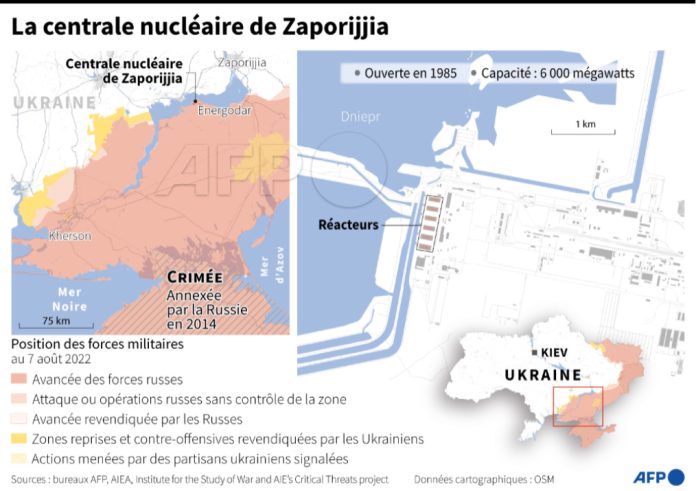 At approximately 0030 EST, a renewed round of shelling landed near the nuclear storage facility of Zaporizhzia Nuclear Power Plant in Enerhodar, Ukraine. Ten explosions were recorded. This strike, which destroyed several energized pylons that Russian engineers have rigged to deliver electricity to Russian occupied Kherson Oblast were reportedly destroyed. However, both sides continue to claim the other initiated the strike. The Russian Ministry of Defense claimed they intercepted several rockets and shot down a Ukrainian Mi-24 from Nikipol which lies just across the Dnieper River. The Ukrainians, despite hints that they were prepared to destroy such an illegal arrangement, claim that the Russian Ground Forces carried out the strike as a false flag operation.

Ukrainian energy agency Energoatam announced that radiation levels at the plant remain safe, although the strike did destroy at least two sensors. Their personnel continue to operate the plant under control of Russian energy officials.

The last 48 hours have seen extensive messaging from both the Ukrainians and Russians surrounding several episodes of artillery shelling at the plant, as we covered here.

Since that report, the U.N. Secretary General made this statement:

“I am gravely concerned about the unfolding situation in and around the Zaporizhzhia Nuclear Plant in southern Ukraine.

I have appealed to all concerned to exercise common sense and reason and not to undertake any actions that might endanger the physical integrity, safety or security of the nuclear plant – the largest of its kind in Europe.

Regrettably, instead of de-escalation, over the past several days there have been reports of further deeply worrying incidents that could, if they continue, lead to disaster.

I am calling for all military activities in the immediate vicinity of the plant to cease immediately and not to target its facilities or surroundings.

I urge the withdrawal of any military personnel and equipment from the plant and the avoidance of any further deployment of forces or equipment to the site. The facility must not be used as part of any military operation. Instead, urgent agreement is needed at a technical level on a safe perimeter of demilitarization to ensure the safety of the area.

The United Nations continues to fully support the critical work of the International Atomic Energy Agency (IAEA) and its efforts to ensure the safe operations of the Zaporizhzhia Nuclear Plant. I urge the parties to provide the IAEA mission with immediate, secure and unfettered access to the site.

We must be clear that any potential damage to Zaporizhzhia or any other nuclear facilities in Ukraine, or anywhere else, could lead to catastrophic consequences not only for the immediate vicinity, but for the region and beyond. This is wholly unacceptable.”