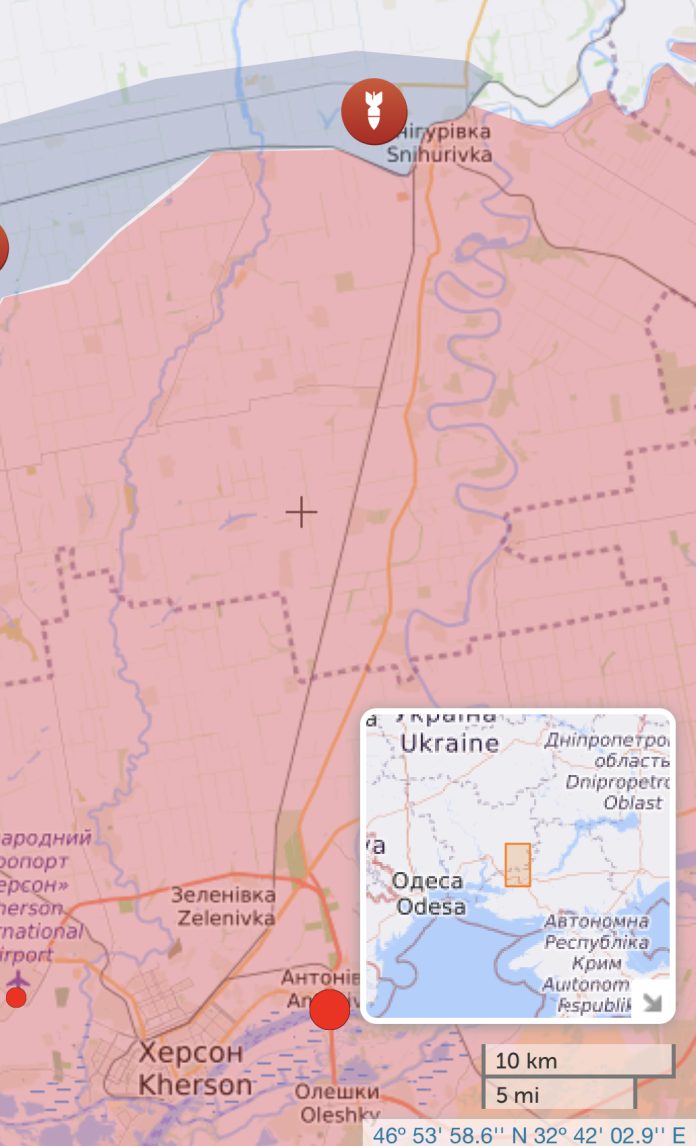 Eight hours ago, Russian telegram sources from within the 205th Seperate Motorized Rifle Brigade began reporting on massive Ukrainian artillery strikes on the settlement of Snihurivka, Mykolaiv Oblast. At the time of that posting, the source said there were about 22,000 Russian troops in and around Kherson and that they were concerned about encirclement from any axis. They also recognized that the destruction of bridges, civilian boats, and barges made for a desperate situation if mass troops had to withdraw:

“Purely professional interest. How will it all end. I’m talking about leaving for Kherson. open arithmetic. There are about 22 thousand of us here. Some have already been taken away, but a small one. Technique, artillery. There are no crossings. There are no bridges. Supply across the river by helicopters. One breakthrough for 10-15 km in any of the directions of Dudchany-Snigirevka-Pravdino and this will mean the encirclement of the rest. They really hold on tight. No doubt. The rest is a question. I will accept a barge as a gift. I’m not kidding.”

However, at approximately 2100 EST, the same sources began reporting of Ukrainian infantry attacks along the forward line of troops, communications blackout, and a pitched tank battle near the settlement itself:

”Now I confirm. Everything is bad with Snigirevka. We’re still holding on, but it’s hard. We won’t pull it out.”

This sentiment was echoed by Snihurivka administrator Yuri Barbashov who told RIA Novosti:

“During the day they got in touch, they said that tanks were driving, judging by the information, there is a very dense clash, not weak, and in the city … Residents saw equipment on the streets in the city center”.
Russian-appointed Kherson administrator Stremousov confirmed the fighting:
“Now there is a battle on the Snigirevsky sector of the front, the Nikolaev region. Today, the Ukronazis undertook reconnaissance in force in three areas: Posad-Pokrovsky, Berislavsky and Snigirevsky. And if in the first two the enemy suffered losses and retreated, then heavy battles unleashed on the Snigirevsky sector of the front in the morning. Ukrovermacht made an attempt to break through, transferring reserves from Wisunsk and Bereznegovaty. The Ukronazis managed to gain a foothold on the northern outskirts of Snigirevka along the railway lines. The settlement is now in the combat zone, aviation, artillery and equipment are working on the enemy. The defense is held by the 205th regiment. The offensive involved Polish and English-speaking mercenaries. Now there is a fight.”
The 205th was committed to the 2022 Russian invasion of Ukraine as part of the 49th Army. The Ukrainian General Staff reported on 3 March that elements of the brigade were sent into combat from the reserves in an attack towards the outskirts of Zaporizhzhia and Mariupol.
Previous article
Eolian VR Awarded 10M USD Contract with USSOCOM
Next article
Canadian National, Afghanistan Veteran Killed in Ukraine