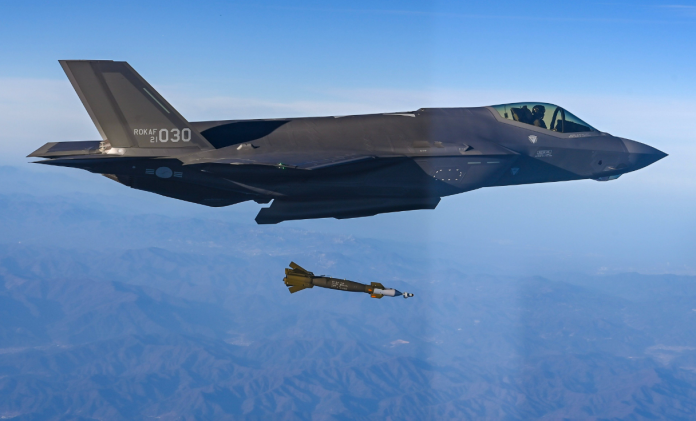 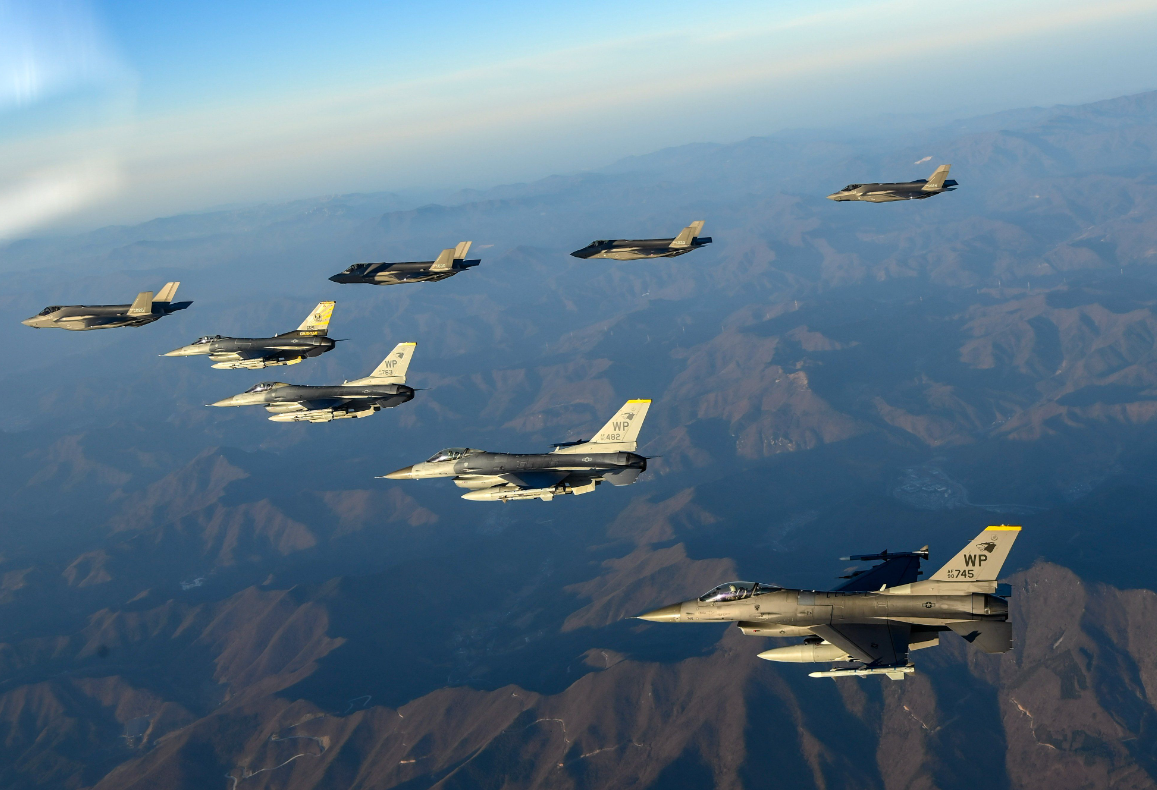 The video from NK News is below:

In addition, the Japanese Ministry of Defense confirmed that four F-15 fighters from the JASDF 6th Air Wing and four F-16s from the USAF 35th Fighter Wing conducted training in the Sea of Japan.

The Chinese Foreign Ministry announced that it hoped relevant parties will “stick to the direction of political settlement” and adress their respective concerns through dialogue. However, Japanese officials are incensed that the North Koreans fired a Hwasong-17 which flew at an apogee of 6,000km and a range of 1,000km, then landed with the Japanese EEZ. The Russian Foreign Ministry announced that the U.S., Japan, and South Korea were “testing North Korea’s patience” with the combined air demonstrations.

In a rare press conference, the North Korean Foreign Ministry answered questions from domestic press and published this interview on their website:

Answered to a question from a reporter from the Korean Central News Agency, Director of International Organization, Ministry of Foreign Affairs, Democratic People’s Republic of Korea.

“Regarding the coercive adoption of the anti-republic of human rights resolution at the 3rd meeting of the 77th session of the United Nations General Assembly on the 17th, Director of the Foreign Affairs Bureau of the Ministry of International Organizations of the Democratic People’s Republic of Korea answered the following questions from a reporter from the Korean Central News Agency on the 18th.

Question: At the 3rd meeting of the 77th session of the United Nations General Assembly on the 17th, it is said that the anti-republican Human Rights Resolution submitted by the United States and its followers was coercive. How do you evaluate this?

Answer: The Democratic People’s Republic of Korea does not recognize and completely deifies the Human Rights Resolution, a product of the illegal and indomitted policy of the United States and its followers.

In our country, where the sovereign rights of the masses of the people are institutionally secured and substantially enjoyed, there is no and no such thing as the issue of human rights that the United States and its followers are talking about.

The fact that the Human Rights Resolution rigged by the adversaries was coercive, does not mean that it reflects the universal views and lip of the international community on the human rights situation of the Democratic People’s Republic of Korea.

China, Russia, Kuba, and many other countries have expressed their clear opposition to the anti-Republic of Human Rights Resolution, which has been unilaterally brought up by Western countries, such as the United States, the EU and Japan.

This proves that the Anti-Republican Human Rights Resolution has nothing to do with the purpose of substantive human rights protection and improvement, and it is merely a means of realizing impure political prayer in the United States and the West.

Question: What is the purpose of the United States talking about other countries’ human rights issues on the international stage?

Answer: The purpose is not anywhere else.

To overturn the system by putting pressure on sovereign states that oppose U.S. power and tyranny and interfere in their internal affairs.

It is an American cliché to create an international pressure space by demarizing independent and just nations and defaming their images.

Now, when sanctions and military threats become unreachable to us, the U.S. is foolishly invoked by the anti-Republication of Human Rights.

In particular, South Korea’s attack on the U.S. Human Rights after Yoon Seok-yeol’s rebellious defeat, who was affected by the same-party, rose to the position of power, clearly shows that the “Human Rights Decision” rigged this time is a product of impure prayer of hostile forces trying to overthrow our ideas and institutions in a fierce

Question: Isn’t the purpose of the United States, the West, and the West coming up with the human rights issues of other countries to divert the international focus on their pathetic human rights situation?

The countries and powers that led the initiative of the anti-republican “human rights settlement” this time are the worst human rights violators and human rights defenders who have left an indelible blemish in the world’s human rights history.

It is none other than the United States, where all kinds of social and institutional human rights abuses, including deep-rooted racism, incurable firearms and firearms, mid-century human trafficking and police violence.

According to recently released data, an average of 122 people die every day in the U.S. from gun crime, including 12 times the death rate of African Americans.

The oppression of democratic forces under the Security Act, the illegal investigation and detention of the people, the abuse of human rights and human beings, such as the collective abduction and corruption of our citizens, the world’s leading suicide kingdom is South Korea.

In Europe, all kinds of social evils such as human trafficking, slavery, abuse of immigrants, evacuation of refugees, and the use of drugs are active, and Japan also holds a world record in crimes against children and women, aliens, and suicide.

It is a mockery and blasphemy of human rights that these worst countries in history are talking about human rights issues in other countries, just like they are human rights judges.

Question: What do you think are the prerequisites for human rights security?

Answer: It is a very worrisome trend that human rights have been politicized and weaponized by minority groups and forces on the United States, the West, and on the international stage, and being stolen as a means of interference and pressure on other countries.

The international community must wake up to the fact that the issue of sacred human rights security is being exploited by the political consums of some countries and turn its attention to its opposition to this negative phenomenon.

There are many countries and peoples in the world, and each country and ethnicity has its own history, customs, and the level of economic and social and cultural development, there is no only human rights standard that is absolutely right for everyone.

In the Democratic People’s Republic of Korea, where the People’s popularist politics is embodied in national activities and social life, the people’s rights and interests are the first and ever-oriented, and true human rights that are thoroughly in line with the interests and needs of the people are enjoyed.

Question: What is the standing of the government of the Democratic People’s Republic of Korea regarding the rioting of the anti-republicity of the hostile forces?

Answer: If the United States and its followers think can surprise or shake us with the human rights riots, there will be no greater mistake than that.

The fact that human rights itself cannot be protected if state sovereignty is violated is clearly demonstrated by the situation of various countries that have suffered wars and all kinds of misfortunes by U.S. aggression.

If there is a threat to human rights security in our country, it comes from the United States and its followers.