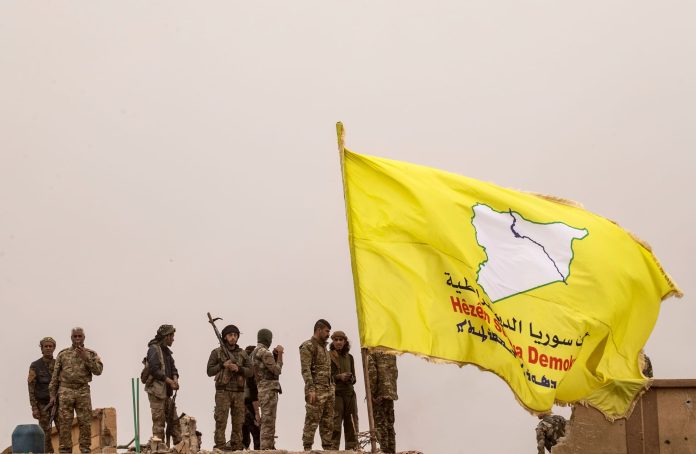 Last Wednesday, the Syrian Democratic Forces (SDF) announced that it would suspend anti-Islamic State operations due to Turkey’s renewed airstrike campaign against Kurdish forces in Northern Syria amid threats of another Turkish ground force incursion into the region.

Head of the SDF Media Center, Ferhad Shami, quoted SDF Commander in Chief Mazloum Abdi in saying that “Due to our forces’ preoccupation with addressing the Turkish occupation, they cannot continue their mission of pursuing ISIS cells. Currently, we’re forced to be preoccupied with confronting Turkish aggression.”

Due to our forces' preoccupation with addressing the Turkish occupation, they cannot continue their mission of pursuing ISIS cells. Currently, we're forced to be preoccupied with confronting Turkish aggression.
Mazloum Abdi, Commander-in-Chief of the SDF

Turkey has ramped up airstrikes targeting Kurdish positions in Iraq and Syria in an operation coined “Claw-Sword,” which their Ministry of Defense describes as “the largest, most comprehensive and most effective air operation” against Kurdish forces “in the recent period.” Hundreds of strikes have been carried out since the operation began on November 20, which Turkey claims has resulted in upwards of 300 casualties against Kurdish forces. Kurdish officials and local media have reported civilian casualties during the strikes.

Renewed targeting of Kurdish positions comes in the aftermath of the November 13 Istanbul bombing, which left six dead and 80 wounded. Turkish authorities have accused the Kurdistan Workers’ Party (PKK) of carrying out the attack and had pledged revenge. The PKK has denied involvement, further accusing Turkey of using the incident as a pretext for more military operations against the Kurds. Turkey considers the PKK, YPG, and SDF to be one in the same and denotes all armed Kurdish groups as terrorist organizations.

However, the camp is still under the threat of the Turkish reconnaissance aircraft loaded with rockets and hovering over the camp.

Last week, Two Kurdish Anti-Terror Unit (YAT) fighters were killed and three others were wounded following a Turkish airstrike that targeted a joint Syrian Democratic Forces-Global Coalition against Daesh base near Qamishli, Syria. The United States Central Command (CENTCOM) told VOA News that “While no US Forces were on the base at the moment of this morning’s strike, these actions do place US troops operating in Syria to defeat ISIS at risk.”

Likewise, Turkish airstrikes targeted Kurdish positions at the al-Hol prison camp, which holds some 50,000 ISIS fighters and their families. According to the SDF, the strikes killed eight fighters and resulted in several people from escaping the camp. Shami later said that all those who escaped were caught and that the security situation was under control. Following the strike, the SDF said that the “The attack was cunningly planned by the occupation, which aims at enabling the ISIS terrorist detainees and their families to escape the camp.” Likewise, General Abdi spoke on the strike, saying that if they continue “Our forces would be busy protecting our own people and families and we wouldn’t be able to guard the camps.”

Although ISIS still remains largely defeated, the security situation in the region remains especially fragile amid threats of attacks and resurgence from cells and those being held at Kurdish operated prison camps.

Al-Hol remains a top security threat and is commonly referred to now as a “ticking time bomb,” as radical extremist beliefs are still being held strongly by those contained there. ISIS cells and women-led gangs reign supreme inside the camp walls despite attempts by Kuridish forces to increase security. Violence and riots are commonplace and makeshift morality police set up by ISIS wives to brutalize those who do not remain loyal to the Caliphate or radical faith. The United State’s Defense Department inspector general also reports that ISIS is still actively recruiting in the camp, blaming minimal security for allowing “uncontested conditions to spread of ISIS ideology.” The whole situation has raised fears of a potential uprising and breakout consisting of ISIS’ most radicalized holdouts from the fall of Baghouz and a generation of ISIS families raised within the walls of the camp.

Likewise, ISIS still possesses the capability to carry out large-scale and destabilizing attacks in the region. On January 20 of this year, some 200 militants launched an assault on the Kurdish-operated prison in an attempt to free thousands of ISIS prisoners being held there. The attack led to a prison riot and mass breakout of prisoners, who fled into the nearby city of al-Hasakah. Over the course of the next week, the battle of al-Hasakah ensued as Kurdish forces, backed by American and British special forces, attempted to regain control of the prison and apprehend escaped extremists. In the end, nearly 350 militants were killed and over 1,000 escaped prisoners were recaptured. However, hundreds of prisoners, including high ranking members of ISIS, were able to escape and the incident marked a massive win for ISIS propaganda and morale.

Turkey’s air campaign and threats of another ground incursion have worried United States officials, who believe that Turkish operations will jeopardize the security situation in the country.

In a statement, Pentagon Press Secretary Brigadier General Patrick Ryder stated that “The Department of Defense is deeply concerned by escalating actions in northern Syria, Iraq, and Turkiye. This escalation threatens the Global Coalition to Defeat ISIS’s years-long progress to degrade and defeat ISIS. Recent air strikes in Syria directly threatened the safety of U.S. personnel who are working in Syria with local partners to defeat ISIS and maintain custody of more than ten thousand ISIS detainees. Moreover, uncoordinated military actions threaten Iraq’s sovereignty. Immediate de-escalation is necessary in order to maintain focus on the defeat-ISIS mission and ensure the safety and security of personnel on the ground committed to the defeat-ISIS mission.”