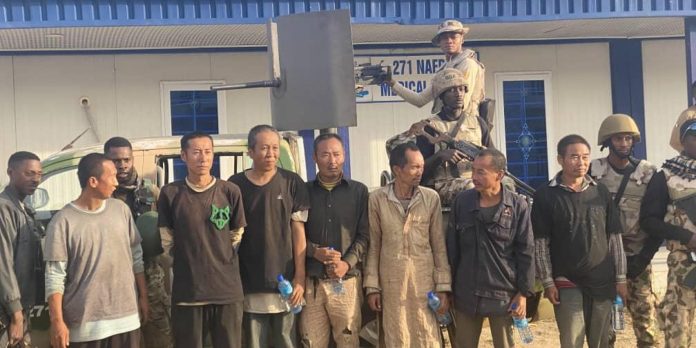 Nigerian special forces rescued seven Chinese hostages who were kidnapped in June by “terrorists” while working at a mine in Niger state, Nigeria.

Nigerian Air Force spokesman Commodore Edward Gabkwet announced that Nigerian operators from the 271 Nigerian Air Force (NAF) Detachment launched a “daring and clinical military operation” in the early morning hours of Saturday to rescue the hostages, who were being held in the neighboring Kaduna state.

Nigeria ?? is winning the war against Banditry!

The Special forces of the Nigerian Air Force has rescued seven Chinese nationals taken hostage by terrorists in Kaduna State. It was reported that the victims had been kidnapped since June from a neighbouring state.#ThankASoldier pic.twitter.com/oZ3j9xGud8

“The Combat Search and Rescue operation, which consisted of 35 Special Forces was conducted in the cover of night at Kanfani Doka and Gwaska general Areas leading to the terrorists abandoning their enclaves, weapons and kidnapped Chinese victims while fleeing for their lives due to the superior fire power of the special forces.”

It remains unclear what group in particular were involved in the kidnappings, as several bandit groups are primarily active in the area, however, militant cells of Boko Haram are also present. Chinese mining companies oversee a large portion of mining operations in Nigeria. With this, kidnapping of Chinese nationals for ransom is not uncommon and are often carried out by armed criminal groups.