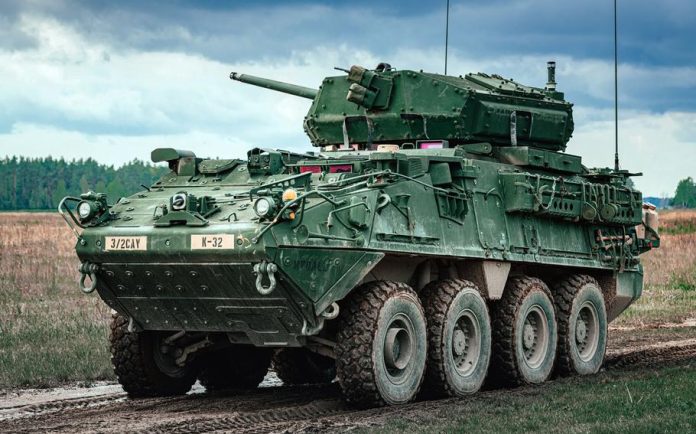 According to anonymous sources speaking to Politico, the U.S. is considering sending the Stryker Infantry Carrier Vehicle (ICV) to Ukraine in an upcoming tranche of military aid. This comes less than a week after announcing sending Bradley Infantry Fighting Vehicles to bolster Ukrainian motorized rifle brigades. Although an announcement probably wont be made for another week, previous leaks have been correct, especially with the recent Bradley announcement.

This leak comes the same day as reports that the UK will send Challenger 2 main battle tanks to Ukraine, a move that would have been unthinkable ten months ago when Western nations were hesitant to potentially escalate with the Russian Federation.

The Stryker is a family of eight-wheeled armored fighting vehicles derived from the Canadian LAV III. Stryker vehicles are produced by General Dynamics Land Systems-Canada (GDLS-C) for the United States Army in a plant in London, Ontario. It has four-wheel drive (8×4) and can be switched to all-wheel drive (8×8).

The Stryker was conceived as a family of vehicles forming the backbone of a new medium-weight brigade combat team (BCT) that was to strike a balance between heavy armor and infantry. The service launched the Interim Armored Vehicle competition, and in 2000, the service selected the LAV III proposed by GDLS and General Motors Defense. The service named this family of vehicles the “Stryker”.

Ten variants of the Stryker were initially conceived, some of which have been upgraded with v-hulls. (wiki)

It is not currently clear which variant the U.S. is considering sending, but there are significant differences in designs, with two being mobile gun systems that are not designed to carry infantry at all but rather to perform armed reconnaissance with a 105 mm M68A1E4 rifled cannon.

Their mission is to move infantry onto the battlefield safely; the M1126 can carry up to 9 soldiers with a combat load. The specifications are below:

The main adversary of Stryker in Ukraine would be the BTR family of vehicles employed by the Russian Federation. The Stryker outclasses the BTRs in most categories except armament, in which the BTR-80A employs the 2A72 30mm autocannon. Although Stryker-borne infantry would carry javelins and other anti-armor weapons, in an urban fight with one vehicle vs the other, the armament is a factor.