Gamers releasing sensitive information about weapons systems to win online arguments is nothing new to the community of War Thunder, a popular vehicle combat game on PC and console.

Over the past few years, there have been several instances of sensitive information being released to prove points when discussing aspects of the aircraft or ground vehicles included in the game. In July of 2021, a user was complaining about inaccuracies about the British Challenger 2 and subsequently published classified documents from the tank’s Equipment Support Publication. In October of the same year, a former French tankerman posted classified documents from the Leclerc main battle tank to prove a point about turret rotation speed. By 2022, a War Thunder player leaked classified documents related to the Chinese DTC10-125 APFSDS anti-tank round during an argument about it on an online forum. 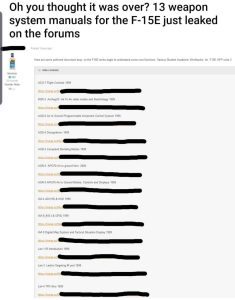 This week, Two users posted over a dozen unclassified, but restricted for public release, documents from the F-16 Fighting Falcon and F-15E Strike Eagle on the game’s web forum. In one leak, a user posted documents regarding the F-16’s use of air-to-air missiles. The next day, another user posted documents from the F-15E’s flight manual, which included information about the aircraft’s flight controls, navigation, targeting and weapons systems. Both posts have been taken down by forum moderators. While the documents are unclassified, they are still prohibited from being shared publicly due to their sensitive nature.