On Wednesday, the House voted 260-169 in favor of passing the Active Shooter Alert Act (H.R. 6538) that seeks to establish an Amber Alert-style alert system that can be sent out on phones in the event of an active shooter situation, called the Active Shooter Alert Communications Network. The bill previously failed to gather enough votes last month on its first try. It will now move on to the Senate. 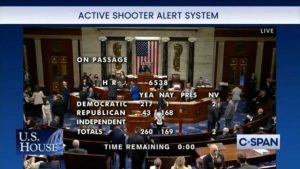 Bill sponsor Rep. David Cicilline (D-RI) stated that “It simply adds a tool to the tool belt of law enforcement all across the country, regardless of their size or location, to be used voluntarily.”

“Law enforcement are too often relying on social media to warn people so that no one accidentally walks into the line of fire or a crime scene,” adding that “law enforcement deserves better than Twitter to communicate with the community they serve.”

Co-sponsor Rep. Fred Upton (R-MI) said that “By alerting the public to an ongoing active shooter threat, we can help folks avoid the area and better enable police and first responders to focus on ending the situation and saving lives. I have heard from our law enforcement and police chiefs that active shooter alerts can be a vital tool to provide accurate, real-time information to our communities, and one they believe will help in these dangerous situations.”

“[In] media reports, the initial sounds were thought to be fireworks. Wouldn’t it have been nice to have had a system that would have alerted the entire parade route to take cover, and maybe some of those folks that were killed or wounded wouldn’t have happened?”

According to the measure, this would include:

Those who opposed the bill included 168 Republicans and one Democrat. 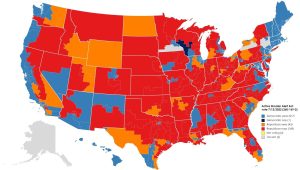 Rep. Jim Jordan (R-OH) described the bill as “an unnecessary gimmick to cede more authority to the already highly politicized Biden Department of Justice,’ arguing the Public Alert Warning System is already in use.

Rep. Chip Roy (R-TX) stated that the bill will “advance fear among the American people,” further suggesting they make a “congressional stupidity alert” due to issues ranging from immigration, inflation, wokism, mask mandates and drug trade.

Rep. Matt Gaetz (R-FL) argued that such an alert system would cause unnecessary chaos in crowded areas, such as a concert, in the event that the alert is issued for an isolated shooting nearby.