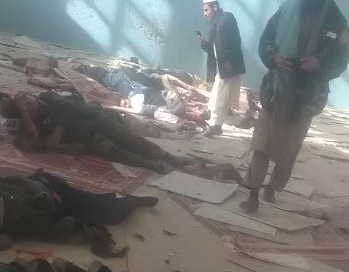 Earlier today, an explosion ripped through a religious school in the Aybak area of Samangan, Afghanistan, reportedly killing 19, according to Taliban officials. International condemnation poured in denouncing the attack, most notably from the Uzbek Foreign Ministry, former Afghan President Karzai, and others. However, ISIS-K, which was the likely culprit of the attack due to their campaign of terror in the country since the withdrawal of coalition forces, has not claimed responsibility.

Instead, a Facebook page purporting to represent the Afghan National Liberation Front claimed that the center was being used as a training school for Taliban suicide bombers. Their post reads below:

According to reliable detective and operative information, the Detective Department of the National Freedom Front established one of the Haqqani terrorist suicide bombers’ training centers, which Haqqani’s terrorist network in this center (Darul-Malamin Shahr Ibak, Samangan Province) more than 150 people. They are giving suicide training. According to the regular plan, the Special Operations Forces of the National Liberation Front started its operations today. After half an hour of clashes, they managed to kill more than 300 people and injure dozens of suicide bombers. During this operation, besides the explosion of several suicide vest depots, an equipped terrorist laboratory was completely destroyed.
Unfortunately, in this operation, one of the hero fighters of the National Free Front was martyred.
Our compatriots should be assured that operations similar to the special forces of the National Freedom Front in other provinces will be carried out on the cores and training centers of the Taliban terrorist group.
The Free National Front will not allow the terrorist Taliban to provide a safe bed for terrorism in the country and thus make the people of Afghanistan ready for their terrorist attacks.”

However, the official website of the Afghan National Resistance Front does not make such claims but did recognize the bombing occurred. Afghan media and Taliban officials claimed that a box with a landmine exploded just before afternoon prayers where several militants had gathered. However, both sources also claimed that children were present during the bombing.

This conflicting information from unverified sources, the execution of a non-suicide bombing, and the trustworthiness of Taliban sources present a puzzling scenario. Unless ISIS-K or another nefarious group claims responsibility for the attack, it will be difficult to prove either narrative.