Crime In Portland Is Going Wild. Here Is Why…

Crime In Portland Is Going Wild. Here Is Why…

Multnomah County District Attorney Mike Schmidt says he hates not having an answer, but will work to solve the issue in Portland's county.

The list of criminal cases that were dismissed in the Portland region this year, because there were no available public defenders to represent the accused, is eye-opening. As a result, victims are still waiting for justice, which may or may not ever arrive.

Chris Day, the TriMet bus driver who was doused with chemical spray 10 months ago after he says he refused to drop off a passenger half a block before her stop, stated that it is “disheartening” to see his case and so many others dismissed. Chris Day was the one who was doused with the spray. He has a hunch that the passenger had issues with their mental health as well as their ability to control their rage, both of which, in the absence of a criminal record, have gone unchecked.

He, like many others, is under the impression that the function of the judicial system is to provide individuals with the assistance they require, and if this assistance is not provided, the situation would only deteriorate more.

This isn’t a ‘democratic ran state’ problem. It isn’t political at all. The list of closed-cases sheds new light on a problem that has been brewing for a long time in Oregon and throughout many other parts of the country: There are too few public defenders, too many cases, uncompetitive pay from the state, and a system that, all parties agree, is not fulfilling its constitutional obligation to provide adequate representation to defendants who are unable to afford lawyers.

After taking the courageous step of publicly disclosing the entire list two weeks ago, Multnomah County District Attorney Mike Schmidt is finally allowing the public to see the full extent of the consequences. He has promised to keep the list up to date on a weekly basis until the issue has been resolved. As of Friday, more than 220 defendants accused of crimes and 75 defendants accused of misdemeanors have had their cases dismissed because there weren’t enough public defenders, dating all the way to the first of the year. 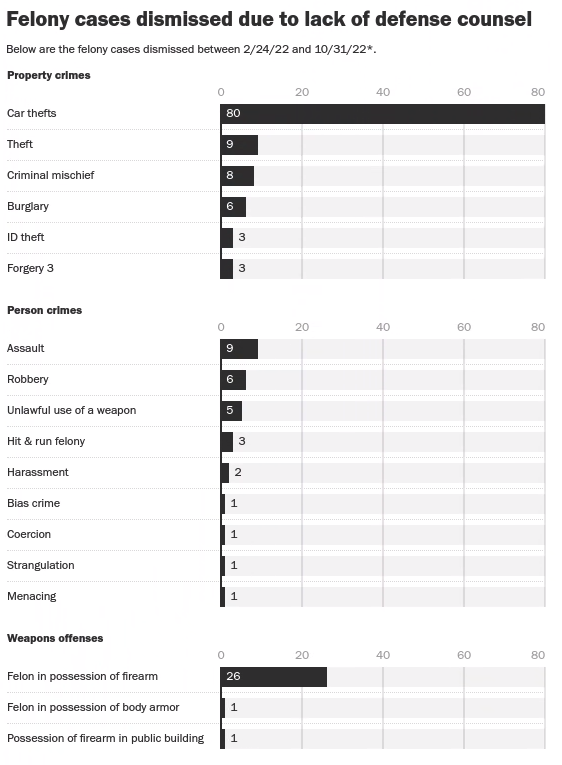 Schmidt has high expectations that the focus will help the general public realize that the issue has not only been detrimental to criminal defendants, who are competing for a limited time with overburdened attorneys, but also to the general public and their fear of security and quality of living.

Schmidt stated that he was able to comprehend the reasoning behind the judges’ decision to throw out cases. But, he said, “it’s horrific. My attorneys are trying to explain this to a victim. It’s like, ‘Hey, sorry, your case was dismissed because the defendant didn’t have a lawyer.’ Where are the victim’s rights in that? …We are having to have a lot of awful conversations with people.”

Multnomah County judges say they don’t want to dismiss cases, but they’re constitutionally obligated to when no lawyer is available to represent the accused. This paints a larger picture: there isn’t enough law enforcement to prevent these crimes from happening. And when those criminals do get caught, there is a greater than 0% chance they get away with it scot-free. As for those who want to enter the legal system, why work for the government, and make worse money? You can enter the private sector and make way more, with less effort.

Multnomah County is not the only location affected by this issue. There are not enough public defenders available to serve clients in the circuit courts of around 10 of the state’s 36 counties. There are now around 700 defendants who do not have legal counsel and are in need of representation. In contrast to the Multnomah County Court, the majority of cases in those courts have not been thrown out as of yet. However, the result is the same: because there is no defense attorney, certain criminal prosecutions have come to a complete halt. This leaves the people of Oregon’s most populated county to question why they would stay, and what is being done about the problem.

Unfortunately, the answer most likely is to spend more money to hire more public defenders and pay them so they will stay. But of course, that’s government spending. And government spending is politics. So good luck trying to get that bill passed swiftly. For now, the people of Portland, and the surrounding area, must deal with the issue of increased crime going not only unchecked but often times: forgotten.