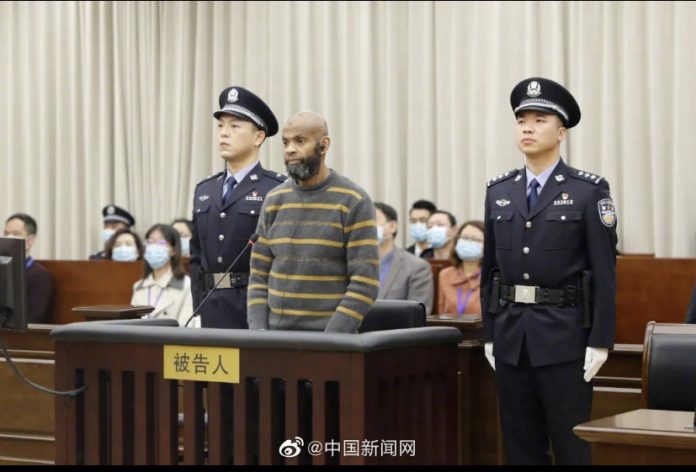 On the night of June 14, 2021, Chen Shijun, a 23-year-old female college student from the same university, was raped and stabbed to death in a grove of trees alongside Shiji Avenue, Yinzhou District, Ningbo. In the early hours of June 15, police arrested a suspect Shadeed Abdul Mateen, an African American English teacher at Ningbo University of Technology who said the reason for the killing was a “relationship dispute”.

“After the trial, it was found that at the beginning of 2019, the defendant Shadid Abdu Metin met the victim Chen Moumou (female, 21 years old), falsely claimed that he was divorced and single, and gradually established a boyfriend-girlfriend relationship with Chen Moumou. Since mid-to-late May 2021, Chen Moumou has proposed to break up many times, and Shadid Abdul Meiting disagreed and made verbal threats to Chen Moumou. At about 20:00 on June 14, 2021, after prior contact, Shadid Abdumeiting, carrying a folding knife, clothes, etc., arrived at the sidewalk near the Qingshuiqiao intersection bus stop on the south side of Tongtu Road, Ningbo City, to meet and talk with Chen Moumou. At about 21:48, Shadid Abdul Meiting stabbed and cut Chen Moumou’s neck several times with the folding knife he carried. After Chen Moumou lost his ability to resist, he continued to stab Chen Moumou’s face several times, resulting in Chen Moumou dying on the spot due to hemorrhage.

The Ningbo Intermediate People’s Court held that the defendant Shadid Abdul Meiting deliberately and illegally deprived others of his life, and his actions constituted the crime of intentional homicide. Shadid Abdul Meiting premeditated revenge for murder, stabbing and cutting Chen Moumou’s face and neck multiple times, causing Chen Moumou’s death. The motives are despicable, the criminal intent is resolute, the means are cruel, the circumstances of the crime are particularly bad, and the consequences are particularly serious. punish.”- China News Network

Shadeed Abdul Mateen is an African American English teacher at Ningbo University of Technology, this trial has stirred up a wave of racist sentiment against black people in China, most likely resulting in this verdict. While the PRC executes the most people by far, probably around 10,000 a year for around 35 executable offenses, several high-profile Chinese murderers have been acquitted or had their executions stayed. This leniency was never going to happen for Mr. Mateen due to his race, which in this case outweighed his nationality. The US State Department has been cooperating with the investigation.