Is Britain’s MDMA Market Returning to Normal After Covid?

Is Britain’s MDMA Market Returning to Normal After Covid? 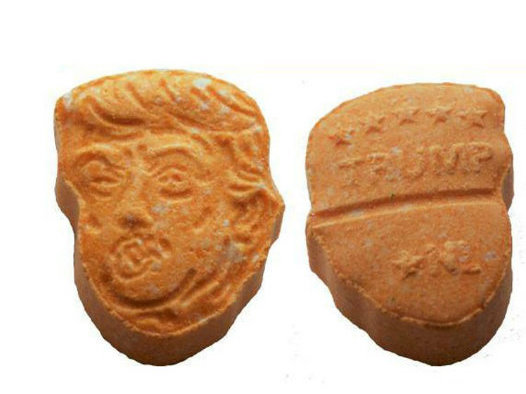 A recent study by The Loop, a UK based harm reduction organisation, revealed nearly half of substances sold as MDMA contained no MDMA in 2021. As seen in the graph below, much of the fake MDMA actually contained synthetic cathinones, a new psychoactive substance, or caffeine. While the report states cathinones are less harmful than other ecstasy alternatives, they can be dangerous when taken as what people assume to be MDMA. Users will often redose after not initially feeling the typical effects of MDMA, which can lead to insomnia, panic, anxiety and possibly psychosis. This shift towards fake MDMA occurred for two reasons, Covid and Brexit. The lockdowns in Britain meant the shutting of nightclubs and cancelling of festivals. As a result, the demand for MDMA fell dramatically, also on a global scale, and production halted as a result. However, when festivals and nightclubs reopened in summer 2021 high levels of demand had to be met quickly. This sudden increase in demand was then met by the easily available cathinones, two of the common adulterants are legal in the Netherlands. Brexit exacerbated the availability issue as traditional MDMA supply routes were disrupted.

After attending testing at Parklife festival in Manchester, The Loop revealed on Twitter fake MDMA may have returned to pre-pandemic levels. This graph below shows a dramatic decrease for 34% of MDMA products containing no MDMA contents. This suggests that MDMA producers across Europe have revived production levels to pre-pandemic levels. A return to normality will bring safer drug use for British partiers. 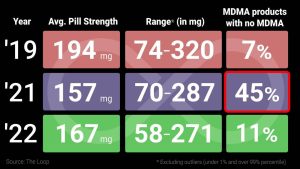 The Loops work is deeply valuable – check out their website to find out more about them.  https://wearetheloop.org