On March 8th, 2022, the United States Intelligence Community released its 2022 Annual Threat Assessment, outlining the nation’s significant adversaries. The Democratic Republic of North Korea (DPRK) was listed fourth, just below China, Russia, and Iran. This threat designation stems from decades of direct and indirect military confrontations between the U.S., its allies, and the DPRK. However, since the Biden Administration took over in January 2021, the threat from North Korea has exploded with dozens of missile launches and the fear of a seventh nuclear test at the Punggye-ri Nuclear Test Site, the only nuclear test site in the DPRK.

The site was built in the early 2000s in Kilju County, North Hamgyong Province, and has carried out six nuclear tests on October 2006, May 2009, February 2013, January 2016, September 2016, and September 2017. All six detonations were underground, restricting data on the tests to seismologists 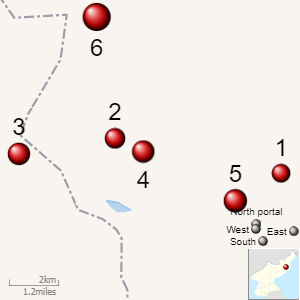 in various private and state-owned seismology centers worldwide. Based on the available data and statements made by the U.S. government, a seventh nuclear test will likely occur in the next six months at Punggye-ri. While open source information regarding the preparations of the Punggye-ri Nuclear Test Site before the 2013 test is limited, the data leading up to the 2016 and 2017 tests provides an interesting timeline that is useful in determining if a seventh launch is imminent. This analysis will outline the missile test activity leading up to the previous six nuclear tests to show the pattern of escalatory actions culminating in the tests. Then it will outline the open-source intelligence concerning preparations at the Punggye-ri Nuclear Test Site, and finally, finish with the strategic messaging carried out by Western nations to prepare the world for and dissuade the DPRK from conducting the test.

The first DPRK nuclear test was carried out on October 9th, 2006. While the detonation was estimated to be a fizzle or an incomplete detonation of the fissile material by the detonator, it was still estimated to have generated a .7kt blast, compared to Hiroshima, which had a 15kt blast. This test was preceded by three major missile tests between 2005 and July 5th, 2006. However, the most troubling part was that in 2004, the DPRK reaffirmed its September 24th, 1999, missile test moratorium, resulting in international shock and a significant blow to the non-proliferation campaign since the fall of the Soviet Union in 1991.

The second DPRK nuclear test was carried out on May 25th, 2009, and registered a 5.4kt blast.  This test was immediately preceded by three missile tests varying from short-range ballistic missiles and ship-to-ship missiles carried out over two years beginning in May 2007. This test likely occurred in a separate chamber 1.2km northwest of the entrance compared to the first test, which was detected 1.2km northeast of the entrance.

The third DPRK nuclear test was carried out on February 12th, 2013; it registered a 14kt blast and was carried out in the West Tunnel due to flooding in the South tunnels in 2012. However, this test took on a completely different character as it was the nuclear debut of Kim Jong-Un, who took power in December 2011. In January 2013, the new DPRK Supreme Leader initiated the Korean Crisis when he announced plans to detonate a nuclear weapon that was small enough to be loaded onto a missile and fired directly at the United States, the DPRK’s primary adversary. There had been a three-year gap in missile tests between October 2009 and April 2012, at which point the DPRK carried out two high-profile launches of what they claimed was the  Kwangmy?ngs?ng-3 Unit onboard three-stage rockets. However, Western analysts claim these were cover stories for enhanced missile testing for inter-continental ballistic missiles (ICBMs).

The DPRK carried out its fourth nuclear test on January 6th, 2016, which they claimed was their first hydrogen bomb registering an 11.3kt explosion.  2016 would be an even more tumultuous year for the DPRK as it conducted its fifth nuclear test eight months later in September with an explosion between 15-25kt. Between the January 6th and the September 9th tests, the DPRK carried out three high-priority missile tests of ICBM, further threatening to target the U.S. Leading up to the fourth test, the DPRK carried out eight launch days with at least 23 separate projectiles from March 2013 to February 2015, the most potent volley over such a short period in the history of the tests.

The DPRK conducted its sixth, and so far, final nuclear test on September 3rd, 2017. This test was, by far, the largest in that an array of global seismologists predicted anywhere from 70-280kt, dwarfing the 25kt blast in September 2016. Between the September 2016 and September 2017 tests, the DPRK carried out 16 launch days with at least 21 projectiles, resulting in the most potent testing period leading up to a nuclear test. This period also includes the DPRK’s first ICBM launch on July 4th, 2017, and its second on July 28th, 2017, indicating a significant escalation of rhetoric and ability to target the U.S. 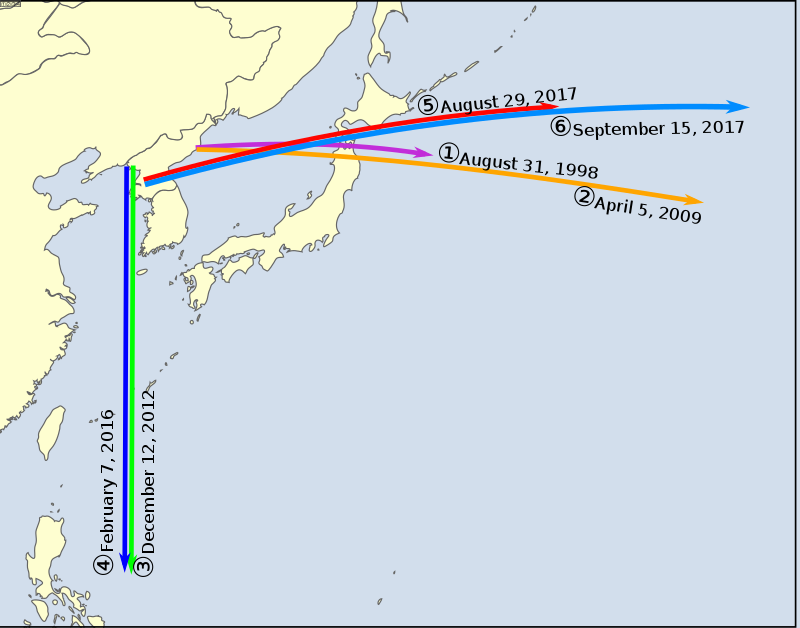 These data sets show that once Kim Jong-Un took power in 2011, a pattern began to emerge that nuclear detonation tests were a culminating point of escalatory missile tests, especially in 2016 and 2017. After the sixth nuclear test, tensions seemed to diffuse when President Trump and Kim Jong-un held their summit on June 12th, 2018, and again on February 27th, 2019. The firing period lasted until November with a total of 1o launch days with at least 22 projectiles. The DPRK did not launch another round of missiles until May 2019, when denuclearization talks between the U.S. and South Korea broke down. Two more launch days occurred on March 2nd, 2020, and March 25th, 2021. Another firing period occurred beginning on September 11th, 2001, in which the DPRK fired seven projectiles over five firing days. While these three instances are significant, they are dwarfed by the firing period currently engulfing U.S. foreign policy concerns in INDOPACOM.

Beginning on January 5th, 2022, the DPRK has initiated a new firing period that has executed 31 firing days with more than 71 projectiles. This firing period has also encompassed the first ICBM launch in four years and the second claimed ICBM. On November 2nd alone, the DPRK fired more than twenty-three missiles, of which one landed in South Korea’s territorial waters. This firing period has significantly escalated tensions on the Korean Peninsula and, based on the 2016 and 2017 missile test data, seems to prime the world for another DPRK nuclear test.

After the sixth nuclear test in September 2017, South Korean media began buzzing that Mount Mantap, where Punggye-ri is situated under, could collapse if another test is carried out. That announcement was made after a tunnel collapse killed one hundred DPRK workers on October 10th, 2017. However, the DPRK did not vow to shut down the site until one month before the first Trump-Kim Summit on May 24th, 2018.

In conjunction with the firing period that began this January, since April, open source analysts at the Center for Strategic and International Studies have published seven extensive studies that highlight the ongoing construction activities at tunnels 3 and 4 of the facility, revealing to the world that at Punggye-ri is ready to host nuclear tests once again. Based on commercial imagery, these analysts have commented that the tunnels, which were blown up in 2018, have been cleared of debris and can support the test of smaller warheads on nuclear-capable cruise missiles if and when the Kim regime orders it. South Korean and American intelligence agencies have told the international community that as of November 7th, 2022, construction and tunnel clearing operations have ceased, and the facilities are once again ready to host nuclear tests. Both the U.S. and the South Koreans publicly stated to expect a nuclear test between October and November of 2022, indicating that classified reporting ensures policymakers that the tests wil