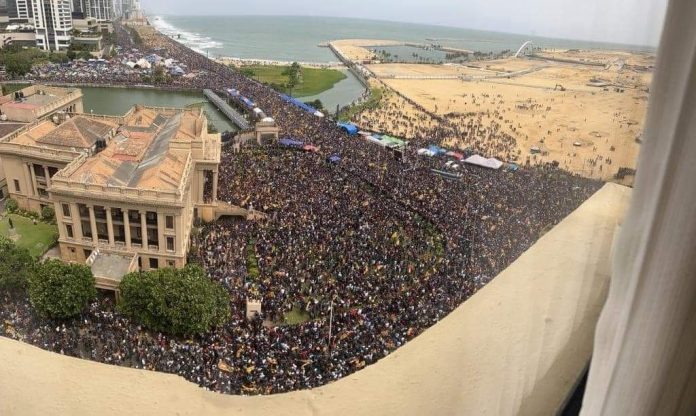 Protestors on the island nation of Sri Lanka rallied to largest city of Colombo on Saturday as an estimated 100,000 gathered outside the Sri Lankan President’s residence before storming the grounds, breaking through security cordons setup by police. The President, Gotabaya Rajapaksa, was reportedly evacuated from his office/residence in the country’s commercial capital. This comes as worsening economic conditions have pushed citizens of Sri Lanka to the brink, a nation of 22 million, things have been tense since the crisis started, the worst financial situation in recent history for the Sri Lankan people.

Sri Lankan Prime Minister Ranil Wickremesinghe has said he is willing to resign and make way for an all-party government to take over, the prime minister’s office said Saturday. After a meeting of party leaders, held by Sri Lanka’s parliament speaker, agreed to ask both the president and prime minister to resign per an “overwhelming request,” Sri Lankan MP Rauff Hakeem tweeted on Saturday.

The President’s poor handling of the economic crisis in Sri Lanka has sparked the flames of unrest in South Asian nation, reports say he has already been moved to a safer location. The country is suffering rampant inflation and is struggling to import food, fuel and medicine. Mothers struggling to buy milk, drivers unable to buy fuel, citizens forced to grave conditions of survival in the nation that is made up three distinct ethnic groups, the Sinhalese, Tamil, and Muslim. Schools have been suspended and fuel has been limited to essential services. Patients are reportedly unable to travel to hospitals due to the fuel shortage and food prices are soaring.

Thousands of anti-government protesters travelled to the capital, with officials telling AFP news agency that some had even “commandeered” trains to get there. They swarmed into Colombo’s government district, shouting slogans such as “Gota go home!”. Police fired shots in the air and used tear gas to try to prevent angry crowds from overrunning the residence, but were unable to stop some of the crowd from entering. 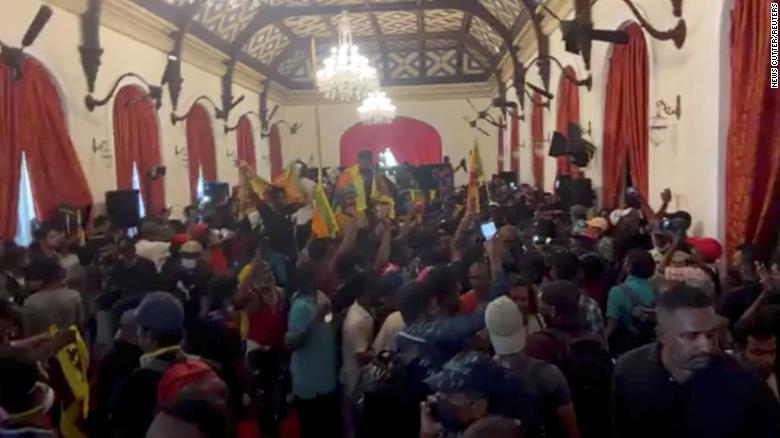 Last week, the authorities suspended sales of petrol and diesel for non-essential vehicles in an attempt to preserve the country’s dwindling fuel stocks. Soaring inflation has left many essential items in short supply and with rolling blackouts that have only intensified the growing unrest, the economic mismanagement of the President led many ordinary citizens to take to the streets. The COVID pandemic has been attributed also with crippling the economy, killing off the tourist trade which is one of the biggest ways foreign currency is pulled into the island nation that sits off of the Southeast coast of India.

The President’s brother, Mahinda Rajapaksa, became a hero among the majority ethnic Sinhalese in 2009 when his government defeated Tamil separatist rebels after years of bitter and bloody civil war. At one point in time India even intervened in the war but this led to even more unrest, bloodshed, and violence, and they withdrew after 3 years, in 1990. For many Tamil however, both India’s force and the Sinhalese majority represent an oppressive force that fills the same role that the British did when they ruled over the Indian subcontinent. Ethnic prejudice led to Sinhalese themselves oppressing the Tamil minority in many ways following independence in 1948, in de facto and de jure practice, as they resented the economic and development preferences that the Tamil received from the British colonizers. This also led to the assassination of the Indian PM Rajiv Gandhi in 1991 by a member of the Liberation Tigers of Tamil Eelam (LTTE).

Demonstrations have been taking place since March demanding that President Rajapaksa quit. The deepening economic crisis saw the president’s older brother, Mahinda Rajapaksa, forced to resign as prime minister in May.

At least 31 people, including two police officers, have been injured in the recent protests and are receiving treatment, according to the National Hospital of Sri Lanka (NHSL). Two of the injured are in critical condition, according to police. A police curfew that was earlier imposed in several police divisions in the Western Province of Sri Lanka was lifted on Saturday. Several politicians and the Bar Association in Sri Lanka referred to the curfew as being “illegal,” saying there had been no instances of violence to justify imposing the measure. 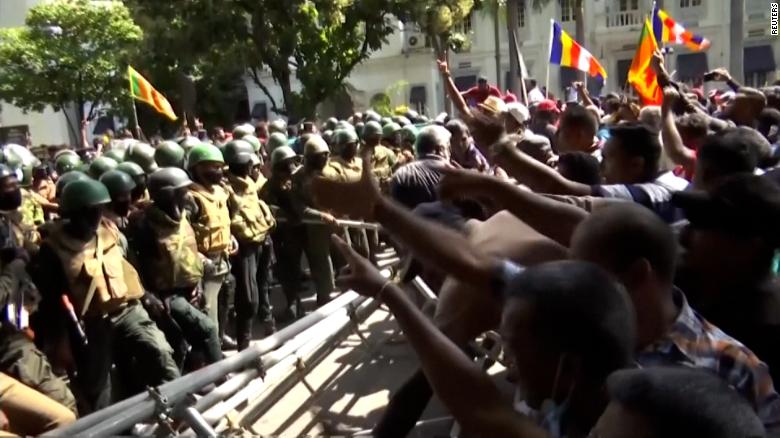 Protesters also breached the official residence of Prime Minister Wickremesinghe, known as Temple Trees, the PM had previously been moved elsewhere. Wickremesinghe has reportedly called an emergency meeting of party leaders to discuss the current situation and come to a resolution, his office said on Saturday. He’s also asked the Speaker of Parliament to summon MPs.

Wickremesinghe said the country had entered talks with the International Monetary Fund (IMF) to revive the country’s economy. This week, he told parliament that talks with the IMF were “difficult” as they entered the discussion as a “bankrupt” country, rather than a developing one.