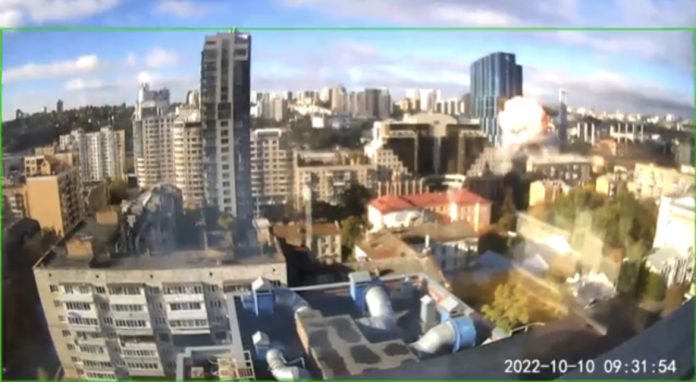 At approximately midnight EST, the Russian Federation fired at least 75 missiles and drones across at least 23 oblasts according to President Zelensky. The strikes targeted key civilian and military infrastructure including bridges, electrical stations, bus stations, military bases, and even the Presidential office and SBU Headquarters in Kyiv. The U.S. embassy in Kyiv sent this email to diplomatic personnel:

The first wave of missiles at midnight EST included up to 40 while another wave at 0300 EST included up to 47 missiles. The Mykolaiv Governor Kim also reported that up to 10 Shahed 136 loitering munitions were sent across the Ukrainian border at around 0300 EST.

For reference, the Russian Federation launched about 100 Kalibr cruise missiles on February 24th, primarily striking military targets. This escalation against civilian targets, especially the energy sector showcases Putin’s desperate bid to disrupt Ukrainian resolve in the face of a Winter without Russian energy.

The most significant damage to Ukrainian infrastructure occurred in Kryvyi Rih, Dnipropetrovsk Oblast after the primary power station was directly struck. The city government announced that the entire city was to be forcibly disconnected from the grid in order to make repairs.

International condemnation has been pouring in all day concerning the escalation of the strikes.

??Statement by @antonioguterres on Russian missile attacks on cities across #Ukraine: pic.twitter.com/EAkMpqGhTh

”The United States strongly condemns Russia’s missile strikes today across Ukraine, including in Kyiv. These attacks killed and injured civilians and destroyed targets with no military purpose. They once again demonstrate the utter brutality of Mr. Putin’s illegal war on the Ukrainian people.

These attacks only further reinforce our commitment to stand with the people of Ukraine for as long as it takes. Alongside our allies and partners, we will continue to impose costs on Russia for its aggression, hold Putin and Russia accountable for its atrocities and war crimes, and provide the support necessary for Ukrainian forces to defend their country and their freedom.

We again call on Russia to end this unprovoked aggression immediately and remove its troops from Ukraine.”

However, the most notable international response was from Moldova, which summoned their Russian ambassador since three cruise missiles from the Black Sea overflew Moldovan airspace to impact targets in Western Ukraine.