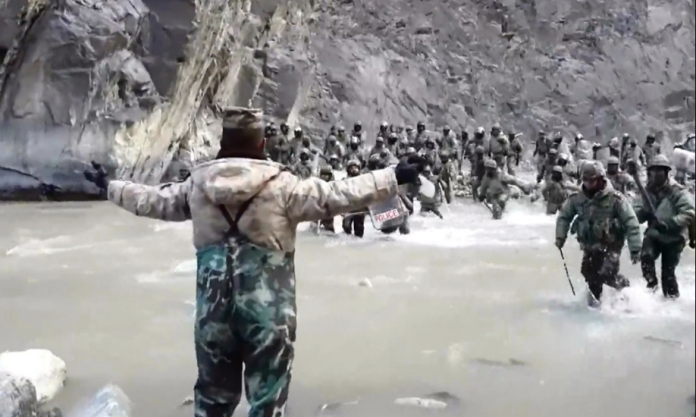 On December 11 this past year, the Chinese People’s Liberation Army and the Indian army clashed with each other at the longest river in Eurasia, the Yangtze.

They were along the Line of Actual Control, the mutually agreed-upon border which is at the core of China and India’s volatile border dispute.

When Indian and Chinese forces went to blows last month, it marked the first major instance of violence between the two armies since June 2020.

Some may remember the videos from those clashes in 2020. The footage that came out depicted these two modern militaries engaging in combat that was almost medieval. They were not using rifles or artillery but rather clubs and shields.

Incase you didn’t see them, below are videos from the 2020 clash,

?? ALERT – China has released official footage from the border clash with India in the Galwan Valley which occurred on June 15th, 2020.

Originally they admitted to 3 deaths from the fighting and 1 from drowning. pic.twitter.com/h6mswddMAo

Clearly another desperate move by #CCP.

Time to repeat this? pic.twitter.com/2CQxPyiYpz

New video from Galwan valley clash released by PLAs on 2020. Translate [Sichuanese] A: The (Indian) leader is here. B: The leader has to suck my ball pic.twitter.com/aWtzASbbxP

BREAKING: PLA released alleged video of Galwan Valley clash between Chinese and Indian army troops in 2020 in which sticks and stones were used during attack. pic.twitter.com/P9N3y1fKv0

For those who don’t know why these two armies bludgeon each other instead of using more modern methods of combat, this curiosity is explained later.

But back to the recent December clashes.
As mentioned, this marked the first major clash in the border dispute since 2020. Unsurprisingly, India and China have differing narratives of the event. This means it is crucial to look at the official statements put out by both nations and then attempt to decipher what actually happened.

Below are two videos from this most recent clash,

While addressing the Parliament of India on December 13, the Minister of Defence, Rajnath Singh summarized India’s account.

This is the full translated statement,
“Honorable Speaker/Chairman,
I would like to brief this august House about an incident on our border in Tawang Sector of Arunachal Pradesh on 09 December 2022.
On 09 December 2022, PLA troops tried to transgress the LAC in Yangtse area of Tawang Sector and unilaterally change the status quo. The Chinese attempt was contested by our troops in a firm and resolute manner. The ensuing face-off led to a physical scuffle in which the Indian Army bravely prevented the PLA from transgressing into our territory and compelled them to return to their posts. The scuffle led to injuries to a few personnel on both sides. I wish to share with this House that there are no fatalities or serious casualties on our side.

Due to the timely intervention of Indian military commanders, PLA soldiers went back to their locations. As a follow-up of the incident, local Commander in the area held a Flag Meeting with his counterpart on 11 December 2022 to discuss the issue in accordance with established mechanisms. The Chinese side was asked to refrain from such actions and maintain peace and tranquility along the border. The issue has also been taken up with the Chinese side through diplomatic channels.
I would like to assure this House that our Forces are committed to protecting our territorial integrity and will continue to thwart any attempt made on it. I am confident that this entire House will stand united in supporting our soldiers in their brave effort. Jai Hind!”

However, news outlets tell a slightly different story that indicates the Indian Minister of Defence was downplaying the number of injured and how severe some of the injuries were.

Also, The Telegraph published an article detailing what they were told about the situation by Indian politician Tapir Gao. According to the article, six Indian soldiers were severely injured by hand-to-hand combat, and the Chinese attacked with a force of almost 600 men.

On the other side, Chinese Foreign Ministry Wang Wenbin addressed the clash during a press briefing which was on December 13, the same day the Indian Defence minister addressed his parliament.

The Ministry of National Defense of the People’s Republic of China published this summary of the briefing their foreign minister gave,

“BEIJING, Dec.13 –Senior Colonel Long Shaohua, spokesperson for the Western Theater Command of the Chinese People’s Liberation Army (PLA), made remarks on Chinese border troops’ routine patrol in Dongzhang area on Tuesday.
According to the spokesperson, on December 9, the border troops assigned to the PLA Western Theater Command conducted a routine patrol on the Chinese side of the Line of Actual Control (LAC) in Dongzhang area in Eastern Sector of the China-India border, and encountered obstruction from the Indian troops who illegally crossed the LAC.
‘The Chinese troops made professional, normative and resolute response, bringing on-site situation under control. Up to now, the Chinese and Indian troops have disengaged,’ stressed the spokesperson, adding that the Chinese side demands that the Indian side should strictly discipline and control its front-line troops and work with the Chinese side to maintain peace and tranquility in the border areas.”

Altogether, each country is saying the other started it by crossing the Line of Actual Control. I leave it to the reader to come up with their own conclusion of which account of the clash is likely the truest.

But one thing all of this does clearly illuminate is the state of Sino-Indian relations. They ain’t good. It appears that India may be one of the few countries in the region that has the strength and desire to contest China in the future. For now, both sides claim that the situation at the border has settled down since the clash on December 9.

Why fight without guns:

This border dispute is deeply complex with a high level of historical nuance. Unpacking it all will not be done here. Rather let us focus on why the two sides fight each other without modern arms.

The choice of arms can be traced back to a 1996 agreement made between China and India when the two nations met to hash out the situation of the disputed border.

If you read the agreement in its entirety, you realize that China and India recognized that the border dispute had a high probability of escalating to a point where it ignited a full war.

War between the two nuclear nations of China and India would lead to a serious amount of death and destruction.

So, since a total war was not in either country’s best interest, the 1996 agreement laid the rules for how both nations would militarily conduct themselves at the Line of Actual Control.

The agreement essentially bans the use of modern weapons by either side.

We see this in Article III here,

Article VI of the agreement is much more explicit on banning modern arms here,
“With a view to preventing dangerous military activities along the line of actual control in the India-China border areas, the two sides agree as follows: (1) Neither side shall open fire, cause bio-degradation, use hazardous chemicals, conduct blast operations or hunt with guns or explosives within two kilometers from the line of actual control. This prohibition shall not apply to routine firing activities in small arms firing ranges.